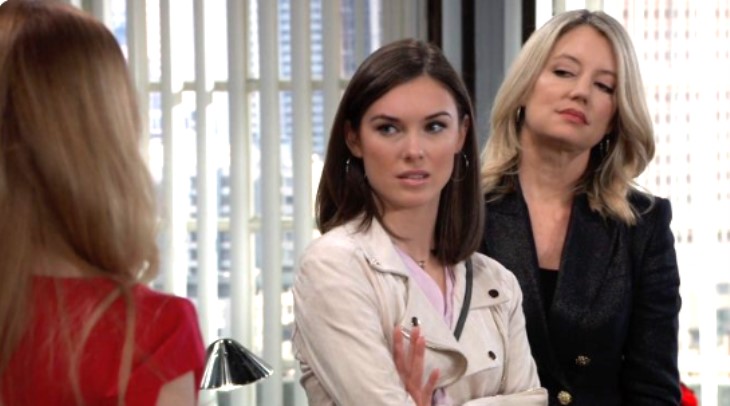 GH fans know that recently, Willow saw Nina at the Metro Court’s bar. Even though Nina and Willow have never had a close relationship, Willow found herself confiding to Nina that she had been right about the fact that Willow didn’t really have a right to be on a crusade or choose sides in a child custody battle when the child in question wasn’t even hers.

Of course, GH fans know there was a lot of talk and emotion, so much so that Nina eventually just told Willow that maybe she ought just to let her know what was going on because something obviously had. Nina could be a sympathetic ear if nothing more.

Then Willow rattled on, but the important part came down to the fact that she walked in on her boyfriend making out with Sasha Gilmore like the two were teens in heat.

Nelle heard it all from the sidelines.

Now, some might be wondering why it might be such a bad thing for Nelle Benson to have overheard Willow’s sob story. Well, it might do some GH fans good to consider the fact that Michael’s been told he needs to marry Willow because she’s super saintly and definitely not a dirty girl in any way whatsoever. This will make Michael look saintly too when he stands before a judge in family court.

However, Nelle’s lawyer is likely to point out that Michael and Willow just got married. Literally, it will appear that Michael made a transparent ploy to make everyone believe he is more of an upstanding gentleman who is more fit to be a parent than Nelle Benson is. Of course, the judge won’t buy into that.

However, at that moment, in comes Chase to the rescue when he is called to the witness stand. Chase might attempt to lie (and perjure himself) and suggest that Willow and Michael have enjoyed a blissful relationship for some time. Definitely, Michael and Willow have been together for a long time before they decided to go ahead and get married!

That’s when Willow’s words to Nina will come back to bite Michael. See, Nelle will have repeated everything she heard to her attorney, who will call Chase out on his lies … and will ask him in front of the judge if it isn’t true that Willow used to be his girlfriend literally a few days before she married Michael.

GH viewers might agree that Nelle will most likely use every bit of information she can to her advantage. There’s an old saying … “Loose Lips Sink Ships.” In the very near future, GH fans just might watch as Willow’s loose lips completely torpedo Michael’s chances to gain sole custody of Wiley Cooper-Jones (Erik and Theo Olson).

If that happens, then all of Chase’s and Sasha’s complicated and entirely unnecessary plans to fake their affair and push Willow into Michael’s arms will have been for naught.