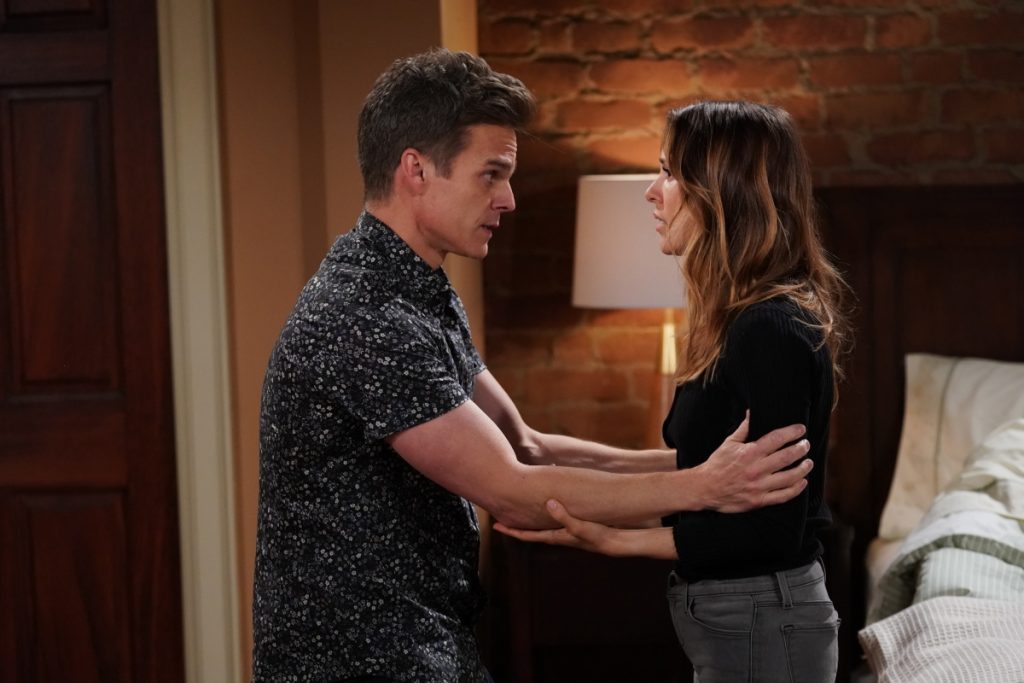 The Young and the Restless (Y&R) spoilers for Thursday, February 13, tease that Jack Abbott (Peter Bergman) will decide to check on Victoria Newman (Amelia Heinle). At Newman Enterprises, Jack speaks with Victoria about Billy Abbott (Jason Thompson), who recently moved out. He mentions Victor Newman (Eric Braeden) and the possibility that he’s gloating, but Victoria insists Billy had ample opportunities to prove her father wrong.

Although Jack feels like Billy will regret his actions, it makes no difference to Victoria. She’s done and Jack doesn’t blame her. After Jack leaves, Nick Newman (Joshua Morrow) catches up with Victoria and they admire a gift for Victor. It’s a statue replica of the car Victor drove when he first started out – right down to the exact make and model. Nick and Victoria agree that Victor’s going to love it.

When they suggest they’re waiting to find out the gender, Michael guesses that Kevin secretly found out. Chloe wants Kevin to spill, so he ultimately admits it’s a boy. Kevin and Chloe get words of congratulations, but Kevin’s upset when he speaks with Chloe privately. He confides his concerns since he grew up with “Terrible Tom” Fisher (Roscoe Born) for a father, but Chloe gives him a pep talk.

At the Grand Phoenix, Billy gushes to Amanda Sinclair (Mishael Morgan) about his new Italian racecar. She declines a ride and ends up chatting with Nate Hastings (Sean Dominic). Nate gets updates on Ripley Turner (Christian Keyes) and how Amanda chose to deal with that situation. It isn’t long until Billy arrives after skidding on black ice and crashing the new car into a tree.

Nate makes Billy sit down so he can check him for a concussion. He mentions how thrill-seeking can be addictive, but Billy downplays Nate’s concerns. Once Billy leaves, Amanda brings up his gambling addiction to Nate.

At the ranch, Ashley Abbott (Eileen Davidson) visits Victoria to catch him up on her life in Paris and see how retirement’s treating him. She’s surprised it stuck this time. Abby Newman’s (Melissa Ordway) name naturally comes up as they talk. Ashley’s congratulatory about Victor’s big Newman anniversary gala. She thought she’d come over for this private moment since things are sure to get crazy at the bash.

After Ashley exits, Jack stops by to see Victor next. They bicker about Billy until Victor admits that he was the one who tried to run down Adam Newman (Mark Grossman). Victor tells a shocked Jack that hitting rock bottom is what Billy needs. He could finally start becoming a man. Victor doesn’t think Jack has faith in Billy either, but Jack snaps that it’s a lie. Nevertheless, Victor maintains that Jack should let Billy fail.

Back with Ashley, she speaks with Billy at the hotel and doesn’t intend to lecture him. Ashley’s hopeful about Billy finding his passion, but she’s bummed about the “Villy” family torn apart. The Young and the Restless spoilers say another drama-filled episode’s ahead. We’ll keep you posted as other Y&R news and rumors emerge. Stay tuned to see what else is brewing in Genoa City.

Days of Our Spoilers: Hattie and Roman Share Sweet Moment While Rafe and Justin Try to Find a Missing Kayla