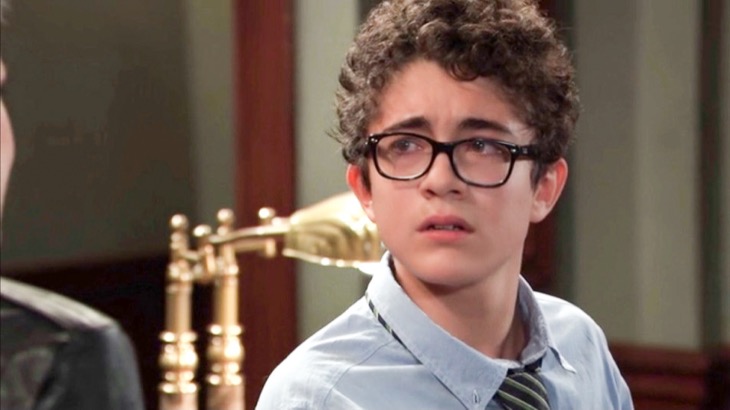 ABC General Hospital spoilers and updates suggest that Spencer Cassadine (Nicolas Bechtel) has a lot of chutzpah. Some GH fans are asking themselves just who this snot-nosed brat thinks he is, dictating terms to his own father. Talk about disrespect!

Everyone knows that Spencer has been absolutely furious with Nikolas Cassadine (Marcus Coloma) ever since his father showed up at his boarding school in Paris. That’s because Nikolas was more than a jerk, leaving Spencer alone for three years, allowing his son to believe that he had died, allowing Spencer to mourn, allowing the kid to think he was an orphan. Most GH viewers would likely direct their fury toward a parent who treated them in the same manner as Nikolas treated Spencer.

With that said, Spencer knows that Nikolas desires to reconcile. To Spencer’s mind, however, Nikolas needs to pay in one way or another. In order for Nikolas to make amends, he needs to give up something. Spencer isn’t stupid. It’s quite likely that he knows the terms of Nikolas’s marriage to Ava Cassadine (Maura West). If Nikolas wants Spencer back, he’s got to prove he loves the kid more than he loves money.

With that said, some GH fans find themselves on the side of Nikolas in this family dispute. After all, Nikolas has repeatedly stated that everything he has done vis-à-vis Spencer was to keep the kid-safe. Nikolas had to pretend to be dead so that anyone connected to him would be safe.

If Nikolas had set out to regain the Cassadine fortune out in the open, blatantly, for all to see … someone could have targeted Spencer out of spite. They could have threatened Spencer in an effort to get Nikolas to back off. They could have kidnapped Spencer. All kinds of bad things might have happened to Spencer if Nikolas hadn’t proven how selfless he was by faking his own death! Too bad no one in Port Charles sees things that way.

Does Spencer want to truly reconcile with Nikolas? He might. But, GH fans might agree that Spencer is going to make Nikolas walk on hot coals and pay a heavy price (that Nikolas considers heavy) before any forgiveness takes place.

The bottom line for Nikolas? Any relationship with Spencer will have to be bought and paid for. Fortunately for Nikolas, or else not so fortunate, that means Ava will have to go.