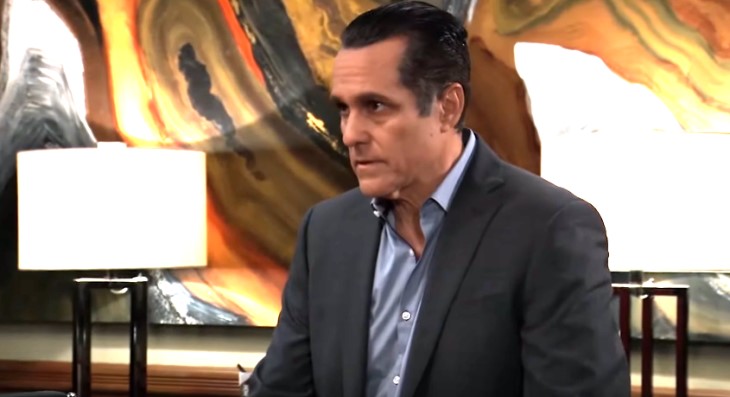 General Hospital (GH) Spoilers hint that Sonny Corinthos (Maurice Benard) and Nikolas Cassadine (Marcus Coloma) are heading towards drama. This will cause them to have a showdown against each other. However, what will be the cause behind the two of them bumping heads?

Ever since Nikolas showed back up into town, his return was not well received by his family and friends. So, it comes as no surprise that he would continue to bump heads with the people of Port Charles. It could be that he could continue his dark ways, which will lead him to bump heads with more characters, with one being Sonny. However, what could be on the same path as Sonny?

GH Spoilers- Sonny Has A Run-In With Nikolas Cassadine

Sonny has been distracted as he rushes to deal with the Cyrus Renault (Jeff Kober) situation and does not have much time to deal with anything else. With him trying to take out Cyrus before anything else happens to his family or friends, what might bring him and Nikolas to bump heads? It could be that with Nikolas being worried about his mother, Laura Collins (Genie Francis), who has been deeply involved in the Cyrus situation.

General Hospital Spoilers: Could A Family Fight Be Brewing Between Molly And Carly Over Brando? https://t.co/32W9xdnhn3 pic.twitter.com/oByPzivB11

He wishes that she will be able to not be as involved in Cyrus’s future actions as she has already been hurt because of Cyrus. This could lead to Nikolas to decide to approach Sonny about the situation and push him into dealing with the situation in a way where his mother is not involved. However, Sonny may still have a bad taste in his mouth when it comes to Nikolas, especially because of what he put his family though and may still be judging Nikolas for his actions before his “death.”

This could lead him and Nikolas to bump heads against each other, and Sonny may decide to leave Nikolas in the dark about his plans with Cyrus especially since Sonny is keeping his plan a secret from most people.

It seems that the two will be facing off against each other in the upcoming episodes. What do you think? What might be the reason for Sonny and Nikolas’s bumping heads? Will Sonny be able to get rid of Cyrus? We’ll give you updates as GH news comes in. Stick with the ABC soap, and don’t forget to check Celebrating The Soaps often for the latest General Hospital spoilers, updates, and news.