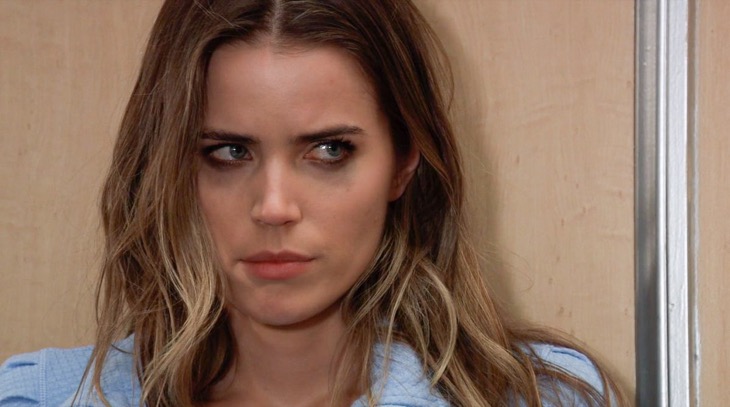 General Hospital (GH) spoilers suggest that the evil genius, Cyrus Renault (Jeff Kober) could be behind the drugs pushed Sasha Gilmore’s (Sofia Mattsson) way. Gh fans know that Cyrus is currently looking to insert himself into the realm of Port Charles’s power players. Having leverage over those who make decisions at major companies, such as Deception Cosmetics could be one of Cyrus’s strategies to do so.

GH fans know that ever since Cyrus got out of Pentonville Prison, he’s been holing up with his bodyguards. Cyrus has been seen making suggestive, subtle threats to people like Carly Corinthos (Laura Wright), Laura Spencer (Genie Francis), her daughter Lulu Spencer-Falconeri (Emme Rylan), the town’s police commissioner, Jordan Ashford (Briana Nicole Henry) and Jason Morgan (Steve Burton). However, despite his subtle warnings, Cyrus hasn’t made any obvious moves.

Viewers know that Cyrus has made a deal with local Mafioso, Sonny Corinthos (Maurice Benard). As part of that deal, Cyrus could live in Port Charles, but absolutely none of Cyrus’s illegal drug operations would be allowed to pass through Sonny’s territory or affect the citizens of Port Charles.

Some believe, however, that Cyrus isn’t about to keep his word.

General Hospital Spoilers – Cyrus Might Have Done it Before

Now, there are also some who believe that it could have been Cyrus Renault who was the source of all the drugs that flowed for members of the Dawn of Day sex cult. If that’s true, then Cyrus was already setting the pattern for what he may be doing right now in Port Charles.

In other words, Cyrus may have used drugs to gain leverage over the lives of those involved in the Dawn of Day cult, including its leader, “Shiloh” Archer (Coby Ryan McLaughlin). In the same way, although he cannot blatantly bring drug shipments into Port Charles, Cyrus can still grow in power and influence by using his drugs to gain leverage over prominent members of society. Cyrus can use his product to gain the advantage of industry leaders and more.

General Hospital Spoilers: Spencer Gets A Surprise Visit In Paris – Nikolas Decides To Give Everything Up For Son? – https://t.co/MwowRgMTbO via @ourteentrends #GH #GeneralHospital

Once these individuals, like Sasha, have fallen and are addicted to Cyrus’s product … he can use his product as a leash to turn these people in any direction he wishes. In fact, it would be a little different from how Cyrus already pulls Jordan Ashford’s leash … making her come when he calls.

The truth is, if this theory is correct, Sasha may not even be Cyrus’s main target. She might just be collateral damage on Cyrus’s path of creeping destruction as he rises to become Sonny’s underworld rival. In fact, if Cyrus continued this hidden strategy, he might not rival Sonny alone. Cyrus might find his interests clashing with those of Valentin Cassadine (James Patrick Stuart).

Either way, GH fans can agree that Cyrus is someone who uses the tools available to him in order to accomplish his ends. Cocaine happens to be one of Cyrus’s tools … and if this is how he chooses to use it, how wonderfully wicked is that?