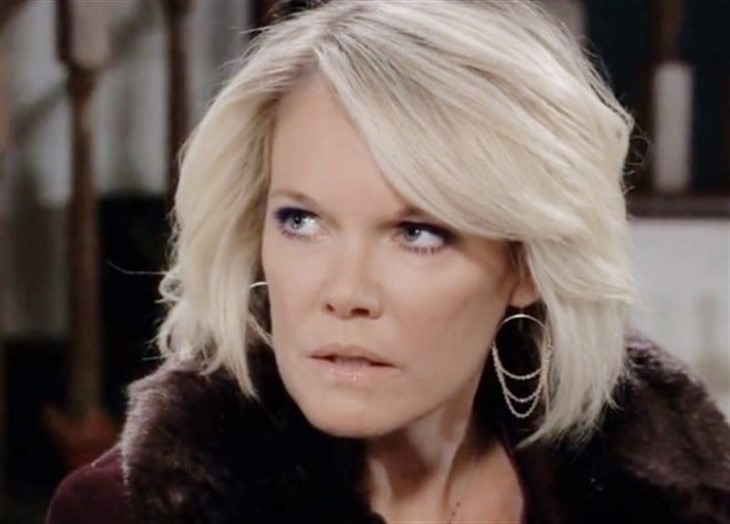 Ava and Nikolas had seemed to be falling for each other; they had even consummated their “business arrangement” marriage recently. Even Ryan could tell Ava is in love with Nikolas, and that is saying something for a narcissistic sociopath!

Nina Reeves (Cynthia Watros) could tell, too, and asked Ava about it as they sat having lunch one day at the Metro Court! It would seem strange that now she would want Nikolas dead, but she can’t get that picture of Nikolas kissing Elizabeth Baldwin (Rebecca Herbst) out of her mind. Obviously, she and Nikolas talked about the blackmail that Scott Baldwin (Kin Shriner) was perpetrating against the two of them and they know about the photos sent to each of their cell phones.

But now Ava has double blackmail coming against her! Scotty wants a lot of money, and Ryan wants her to divorce Nikolas. Ryan also has the letter that Nelle Benson Jerome (Chloe Lanier) wrote where she told everything. She wrote about Julian Jerome (William DeVry) knowing that Wiley Corinthos (Erik and Theodore Olson) was really her and Michael Corinthos’ (Chad Duell) son. Ryan could easily re-send that letter to Sonny Corinthos (Maurice Benard)! That, indeed, was Ryan’s threat. Divorce Nikolas or sentence Julian to death in the Pine Barrens!

GH Soap Spoilers – Or Is Ava Jerome Trying To Kill Two Birds With One Stone?

Maybe Ava is trying to kill two birds with one stone on the ABC soap opera – or get Ryan to kill one of them! Maybe it’s not Nikolas she’s trying to get rid of after all. Maybe it’s Scott! But then there is the tricky business of how to get Ryan out of Pentonville so he can kill either Nikolas, Scott, or maybe both of them! But Ava is playing with fire – after all, Ryan wants her back. With Nikolas out of the way, Ryan will expect to have “his” Ava back again!

The only way she can solve the problem of Ryan is to be lurking in the shadows as he does, and kill him! She’s tried before – it was the stab wound with his own knife that landed him in General Hospital, and then in Pentonville minus a kidney! General Hospital spoilers hint she could bring Julian in on the plan but he is not going to go along with it. He has been out of the mob business for a long time, and he doesn’t want to get back in it.

Sonny isn’t going to want to get anywhere near Ryan or have any part of this plan. Still, Ava goes to the prison and talks to Ryan about revenge, and that she knows he understands and appreciates the fine art of revenge!

Just what does Ava have in mind that she wants Ryan to do? Stay tuned to GH and keep checking General Hospital spoilers frequently for all the latest news, updates, and soap opera spoilers!