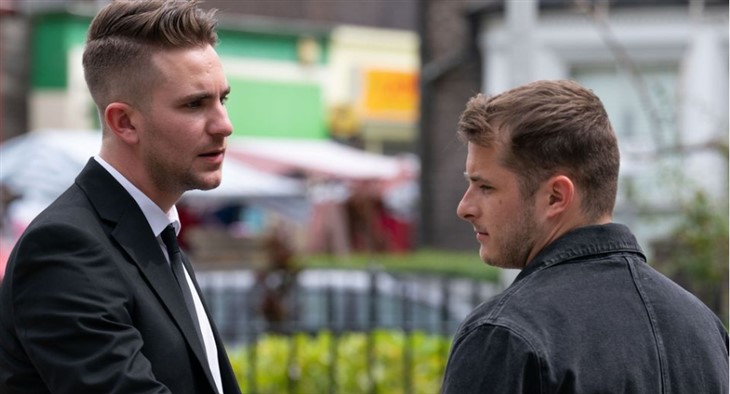 ITV Eastenders spoilers reveal that Ben Mitchell (Max Bowden) and Callum Highway (Tony Clay) have overcome so much. However, they also have faced a lot of challenges and more obstacles could be in the future. Is it possible that “Ballum” ends up being ripped apart due to Phil Mitchell’s (Steve McFadden) quest for revenge? Keep reading to find out more information.

Prior to the soap going on hiatus, Phil planned on buying Queen Vic and living his life with Sharon Watts (Letitia Dean), but without her baby boy. In the end, Sharon couldn’t abandon her son again, so Phil tried to push the sale of Queen Vic through as quickly as possible. However, it was bought from under him by Sharon and Ian Beale (Adam Woodyatt).

Eastenders spoilers indicate that Phil will somehow seek revenge. While it isn’t clear what he plans on doing, there are several theories. One that has surfaced is that he will get Ben’s help in planning payback. However, where does this leave Callum?

As fans know, Ben and Callum are men who love each other, but their lives are going in two separate directions. Ben has chosen his father and revenge over Callum, who is a police officer trainee, per Express. What is he supposed to do if Ben helps his father with some shady dealings or a revenge scheme? Will he turn a blind eye or be forced to uphold his oath to the law?

During a recent segment of Secrets From the Square, Bowden said that Ben is returning to a life of crime while Callum is headed in the opposite direction.

The couple has been torn apart before due to their differences in how they handle things. Revenge and just being Phil Mitchell’s son has caused conflict. Will Phil ask his son to help him again when new episodes return? Could he be so focused on revenge that he ropes Ben into another sinister scheme? How will Callum deal with this and could it end “Ballum” forever?

What do you think is going to happen when the soap comes back in September? Will Phil Mitchell seek revenge? What kind of scheme will he come up with and could Ben Mitchell be roped into it? We will just have to be patient and wait for new episodes to air in order to find out.

The Bold And The Beautiful Spoilers: Zende Brought Back As New Loves Interest For Zoe?