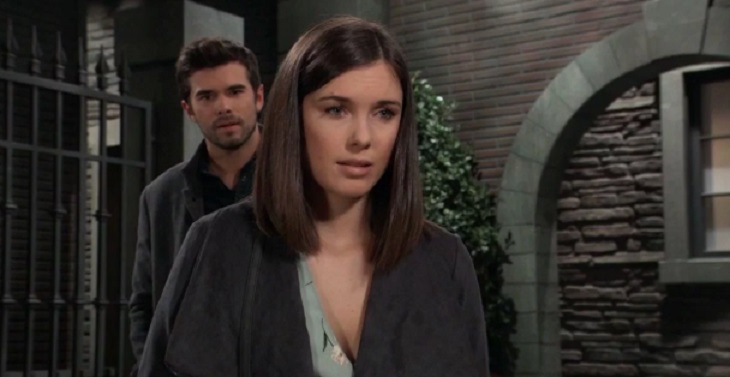 General Hospital spoilers and updates suggest that Harrison Chase (Josh Swickard) and Willow Tait (Katelyn MacMullen) might still have a future together. GH fans know that Chase is terribly conflicted. While Chase believes that everything he did was for the ultimate good, he still cannot handle the loss of the woman be believes was “the love of his life.”

General Hospital Spoilers – Chase Tries to Give Up

Seeing Michael Corinthos (Chad Duell) and Willow together has to eat Chase alive. Most men (apparently unlike Chase) would rather gouge out their own eyeballs than see a woman they’ve been intimate with, a woman they supposedly still love deeply, in the arms of another man. Some might agree that’s especially true when thinking of the love of one’s life in the arms of the spineless Michael Corinthos. Indeed, one wonders how Chase was ever friends with Michael, to begin with … but that’s a separate issue altogether.

For the sake of Wiley Cooper-Jones (Erik and Theo Olson) and for the sake of Willow’s mental health, Chase is apparently willing to be a character in Charles Dickens’s “A Tale of Two Cities” … essentially a self-sacrificing martyr. Therefore, Chase will do everything in his power to stay away from Willow. He’ll do his best to keep from seeing Michael and Willow walking in the mall arm in arm.

Some think Chase might even try to find love in the arms of Brook Lynne Quartermaine (Amanda Setton) or even Lulu Spencer-Falconeri (Emme Rylan).

Many believe that Chase won’t be able to hang with his decision. The longer Chase is away from Willow, the more he’s going to ruminate on how stupid he was. The words of his brother Hamilton Finn (Michael Eaton) will echo in his ears. That’s especially true if Michael and Willow lose their court custody case against Nelle Benson (Chloe Lanier). If Michael and Willow married for nothing then all of Chase’s idiotic plotting together with Sasha Gilmore (Sofia Mattsson) was also for nothing. In that case, Chase has absolutely nothing to lose by confronting Willow and confessing all.

If vapid women are Chase’s thing, oh well. There’s no accounting for Chase’s taste. Right? However, the sad truth is that even though Willow doesn’t love Michael and the only reason she married him was to “save Wiley,” and even though she’s repeatedly suggested that she still loves Chase … she’ll probably reject any attempt at reconciliation Chase might make. While some might be sad at that prospect (Chase most certainly will be) the truth is that many GH fans will rejoice.

No one wants to see Chase, who is a promising character, bogged down with a woman who is not his intellectual equal, who cries over everything, who is emotionally stunted, and who is as much a limp spaghetti noodle as her new husband.

Chase might try to fight to get Willow back … but there’s a heck of a lot of GH viewers who think Chase really should let that one go. After all, there are much better and more interesting prospects elsewhere in Port Charles.

Days of Our Lives Spoilers: How Does Sami Deal With ‘Wilson’ Adopting Allie’s Baby?

‘The Bold And The Beautiful’ Spoilers: Thomas Forrester Returns To Stir Up Drama In New B&B Episodes