General Hospital Spoilers: Nina Is Kinder To Nelle Than To Willow – Subconscious Revealing They Are Related? 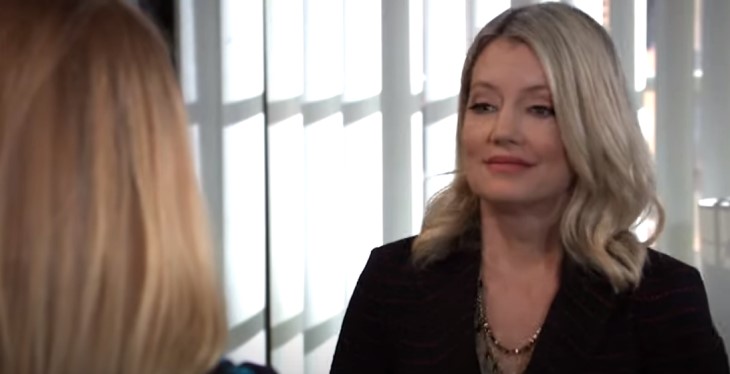 General Hospital (GH) spoilers suggest that Nina Reeves (Cynthia Watros) might unknowingly be kinder to the crazy Nelle Benson (Chloe Lanier) than she is to Willow Tait (Katelyn MacMullen). Some GH viewers believe that this might actually be due to the fact that Nina subconsciously recognizes that Nelle is her daughter!

GH fans know that Nina has not had an easy relationship with Willow Tait. From arguing with Willow after overhearing Willow talk about her baby on the phone, to bumping heads over Charlotte Cassadine (Scarlett Fernandez) Nina’s had plenty of conflict with her.

Of course, GH viewers have seen somewhat of a thaw in the ice between them as Willow’s shown that she is someone who desperately wants to be a mother … as does Nina. Moreover, Nina has watched Willow go to bat for Wiley Cooper-Jones (Erik and Theo Olson), a child who isn’t even her own.

With that said, even with “sort of” calming down and being nice to Willow, Nina hasn’t exactly exuded warmth and kindness. The most she’s done of late was to tell Willow that she would be willing to lend a “sympathetic ear” when she saw that Willow was upset over the fact that Harrison Chase (Josh Swickard) had dumped her.

On the exact flip-side, GH viewers have watched as Nina has gone out of her way to be nice to Nelle. That’s despite the fact that Nina is quite aware of all the horrible crimes of which Nelle has both been accused and convicted. Even Jasper “Jax” Jacks (Ingo Rademacher) freaked out over how nice Nina is being toward Nelle. In fact, he accused Nina of identifying with aspects of Nelle’s character and background, but that she was projecting some of her own goodness onto Nelle. Viewers know this enraged Nina and she told Jax that maybe he didn’t know her as well as he thought he did. Then Nina warned Jax not to put her on a pedestal.

Despite warnings from many others and in spite of knowing Nelle’s criminal background, Nina still hired Nelle at Crimson. Even though Nina told Carly Corinthos (Laura Wright) that her intention was to keep an eye on Nelle and gather intelligence that could aid Michael Corinthos (Chad Duell) in his child custody case against Nelle … viewers have seen Nina begin to become emotionally attached to the psycho.

GH fans know that the clues seem to constantly shift when it comes to who Nina’s daughter happens to be. At one moment, fans think Nina’s daughter is Willow. At others, viewers’ opinions change and they believe Nina’s daughter is Nelle. Now, the question is whether Nina has an innate sense of which of these two GH characters is the real deal.

Will Nina find herself growing closer to Nelle only to discover that Willow holds the other half of her locket? On the other hand, could GH viewers find that Nina is drawn to Nelle for good reason?