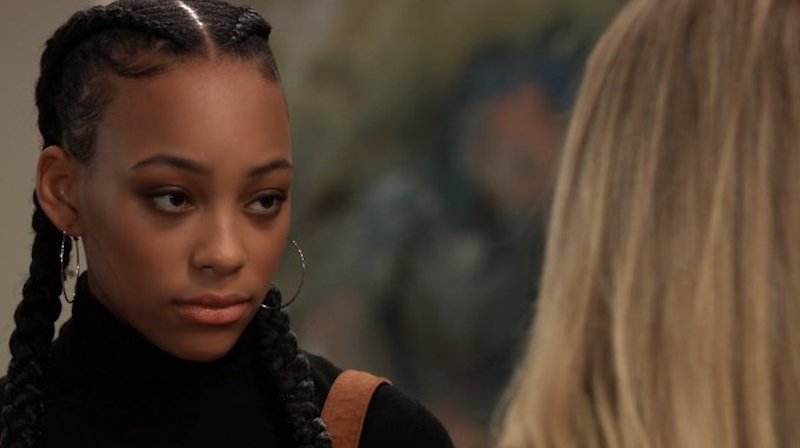 General Hospital (GH) Spoilers hint that Trina Robinson (Sydney Mikayla) and Cameron Webber (William Lipton) may grow closer together as their relationship continues to be explored. As viewers know, Trina and Cameron, found themselves in the middle of a front-burner storyline involving a mob war going on between Sonny Corinthos (Maurice Benard) and Cyrus Renault (Jeff Kober). On the way to a party, the two found themselves kidnapped by Cyrus’s man. This has to lead them to grow closer due to their shared experience. How might this play a role in the two of them exploring an upcoming relationship?

Viewers may remember that Cam and Trina were in the mob storyline as they were kidnaped by Cyrus’s men. They were rescued, but the incident led to the death of Taggert, which impacted Trina in a negative way. However, it has also brought both Cam and Trina together as they lean on each because of their similar experiences. The friends, including Cam, Trina, and Josslyn Jacks (Eden McCoy), leaned on each other in order to cope with their recent troubles. Cam and Trina have gotten so close to each other since the incident that they went through. This has even led to them kissing each other after feeling a connection between each other.

General Hospital Spoilers- Cam and Trina Work on a Relationship

New spoilers hint that the two guys could take the next step in their newly developing relationship. It seems that Cam and Trina will be “moving forward” this could mean moving forward in their relationship. It would be interesting to see if they will become official or even see where things go in the upcoming episodes. It seems that fans feel the same way about this as they take to twitter about how they feel about the potential relationship. One viewer said, “I have no use for Joss. She is already her mama’s daughter in action & belief. She will never wake up to the truth about the Mob. Cam & Trina are fantastic together.”

However, some viewers are worried about what this may mean for the friendship between Cam, Trina, and Joss, in which one viewer said “I love Cam and Trina, but I also love Trina and Joss’s friendship. Whatever you do, please don’t write a story where these two girls end up at odds over a boy.” We’ll give you updates as GH news comes in. Stick with the ABC soap, and don’t forget to check SOS often for the latest General Hospital spoilers, updates, and news.