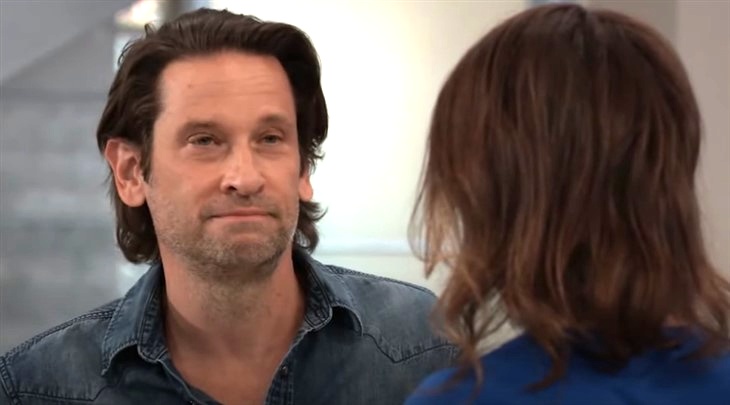 ABC General Hospital spoilers tease that Franco Baldwin (Roger Howarth) and Elizabeth Webber (Rebecca Herbst) have seemingly hit a rough patch in their marriage. But is everything that it seems? Elizabeth has voiced her concerns about Franco’s willingness to embrace his dark past in order to regain his stature as an artist, thanks to Ava Jerome (Maura West) prodding him along.

Franco just wanted to provide for his family and he isn’t happy anytime Nikolas Cassadine (Marcus Coloma) gets anywhere near Nikolas, given their romantic history. What they didn’t know is that because of the postnup agreement that both Nikolas and Ava signed, the first one of them that cheats on their marriage will lose their access to the 95% of the Cassadine fortune. Since neither of them is willing to give up their claim to the money, it is in their best interest if the other cheats on their vows.

But all that changed when Elizabeth overheard Ava and Nina Reeves (Cynthia Watros) discussing the postnup at the Nurses Ball. Suddenly, Elizabeth allowed herself to kiss Nikolas while Franco and Ava also kissed. While it’s possible that Franco and Elizabeth have gotten so fed up with each other they are looking for comfort in the arms of another. But that doesn’t seem in character for either of them at this point in their lives.

GH Spoilers – Elizabeth Webber  Has Cheated With Nikolas  Cassadine Before

While it is true that Elizabeth cheated on Lucky Spencer (Jonathan Jackson) with Nikolas in the past, Elizabeth has fought way too hard for Franco to give up on her marriage that easily. This is the same woman who fought tooth and nail to get Franco back when he believed he was Drew Cain (Billy Miller) last year. It just doesn’t seem like she would cheat on Franco, especially given what she overheard.

General Hospital Spoilers – – Did Elizabeth Webber And Franco Baldwin Decide To Fight Back?

Now that they know about the postnup, it seems more likely that they have come up with a plan to stop any further manipulation from Nikolas or Ava. It can’t be just a coincidence that Elizabeth and Franco decided to kiss someone else at exactly the same time. More than likely they are responsible for whoever photographed both indiscretions. Perhaps the thinking is that if it can’t be proven who cheated first, the postnup will be useless and all the scheming that Nikolas and especially Ava have done will have been for nothing.

General Hospital Spoilers And Rumors: Cyrus Obsessed With Laura – Targets Kevin To Get Rid Of Her Husband? #gh #generalhospitalhttps://t.co/Fg9K5ckSrA

And who do you think took the incriminating photos of both couples? Only time will tell, so stay tuned to General Hospital, airing weekdays on ABC to watch it all unfold! And don’t forget to check back here regularly for all your General Hospital news, information and spoilers!

Days of Our Lives Spoilers: Kristen DiMera Finds Herself Behind Bars, Brady Vows To Get Her Out!