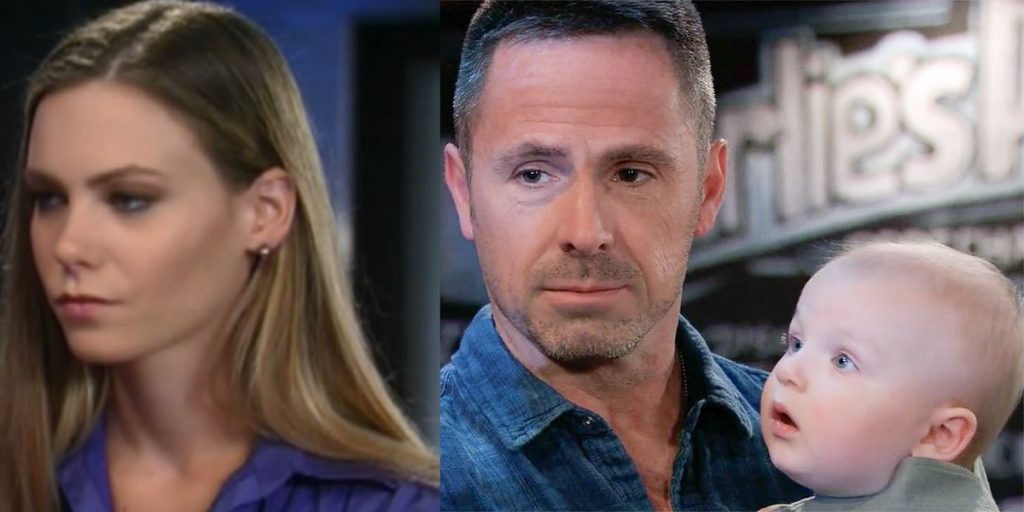 ABC General Hospital spoilers and updates suggest that Julian Jerome (William deVry) might be nobler than many in Port Charles give him credit for. That or Julian could be more afraid of Sonny Corinthos (Maurice Benard) than many have believed him to be. Either way, GH fans have to be asking themselves why Julian would truly agree to marry the wicked Nelle Benson (Chloe Lanier).

While many GH fans believe that Sam McCall (Kelly Monaco) was right when she slapped her father and let him know how despicable she found him to be, others believe Julian has an ulterior motive for marrying Nelle Benson. Yes, it’s true that Nelle threatened Julian and blackmailed him into the marriage. Certainly, Julian doesn’t want certain things coming to light vis-a-vis Sonny Corinthos (Maurice Benard). Still, what if Julian chose to marry Nelle for an altruistic reason of his own?

Some believe that Julian may truly have love somewhere deep inside of him for little Wiley Cooper-Jones (Erik and Theo Olson). GH viewers may recall that for most of Wiley’s life, Julian believed that he was the child’s grandfather. Many fans might agree that love for a child-like Wiley doesn’t simply disappear the moment one discovers the child isn’t really related by blood.

Mightn’t Julian have agreed for selfish reasons and in order to ensure Wiley’s ultimate safety?

Many GH fans might agree that when it comes to the child custody case between Michael Corinthos (Chad Duell) and Nelle Benson, Julian might have seen the writing on the wall. Julian has been paying attention to developments, and while Nelle is obviously a monster, Michael hasn’t been the smartest tool in the shed. Moreover, Michael’s lawyer Diane Miller (Carolyn Hennesy) has proven herself to be one of the most inept attorneys in all of Port Charles (perhaps in all of New York).

Julian may have thought to himself that Nelle would find someone to marry even if he told her “no.” In fact, fans might agree that it’s reasonable for Julian to assume that Nelle’s victory in court is all but assured. In that case, who better to keep Wiley safe than Julian?

In this situation, Julian can keep himself safe from Sonny and keep Wiley safe from Nelle. It’s a win-win.
Remember, Nelle is devious and dangerous, but so is Julian. The difference between the two is that Julian actually loves the kid. Does anyone believe that Julian would hesitate to make Nelle truly disappear if she placed Wiley’s life in actual jeopardy?

General Hospital Spoilers: In What World Is Lucas NOT Part Of Wiley's Custody Hearing? #GH #GeneralHospitalhttps://t.co/AMNFNeReZb

Now, some GH fans have just been waiting for Julian to come into his own. He’s made a ton of mistakes, and Julian certainly isn’t an archangel. Yet everyone has seen momentary sparks of goodness inside Julian. When Julian cares about someone, he genuinely cares. Just consider the fact that out of everyone Alexis Davis (Nancy Lee Grahn) called when she fell off the wagon, it was Julian alone who came to pick her up. Julian was there for Alexis.

Some believe that now could be Julian’s moment to shine. Now could be the moment that sees Julian make a move toward real redemption. For the naysayers out there, remember Valentin Cassadine (James Patrick Stuart). No one thought he could change either.