General Hospital Spoilers: Nelle & Martin Plot Their Strategy For Family Court – How Far Will They Go? 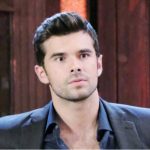 Nelle, of course, thinks she’s got everything figured out. She has money from selling Shiloh Archer’s (Coby Ryan McLaughlin) ELQ shares (she thinks – they are still in probate!) and she’s got a job at Crimson Magazine which she figures she can spin into a much more prestigious and high paying job. As an “assistant” she’s in reality lucky to make $15.00 an hour, which barely makes ends meet in real life!

Maxie Jones (Kirsten Storms) had a much higher paying job at Crimson, and with much more responsibility, and yet we don’t see her with her own house – she and Peter August (Wes Ramsey) are living together in her apartment, although they have been talking about getting a house. She’s got money, she’s got prestige, and she’s got it together as far as she’s concerned and she has only the best interests of her son in mind.

Attorney Martin Gray and Nelle Benson meet up to plot their strategy for family court. Nelle brags about herself and her prestigious position (she puts a spin on it even to Martin!) at Crimson Magazine, and he hates to burst her bubble, but for one thing, he does his homework and he tells her he knows exactly what her position is at Crimson, and trying to put a spin on it to the family court isn’t going to cut it.

She, of course, thinks her own strategy will work much better than Martin’s and tells him that he should focus on Michael Corinthos’ (Chad Duell) criminal history and his relationship to the mob don, Sonny Corinthos (Maurice Benard). The attorney dryly reminds her she’s got a much worse criminal history of her own, and that Michael’s murdering his stepmother was in defense of his baby sister! The best outcome that Martin can speculate based on his experience in custody cases is to presume shared custody of Wiley Corinthos (Erik and Theodore Olson), which means both Michael and Nelle will have custody of the child.

This rankles Nelle, who asks if her lawsuit against Bobbie Spencer (Jacklyn Zeman), Carly Corinthos (Laura Wright) and Monica Quartermaine (Leslie Charleson) will help her in family court – after all, they forged her name to a permission document to do unnecessary surgery on her child and then destroyed the paper trail! Martin tells her that bringing up the lawsuit would only go against her in family court and that the family court judge would take medical professionals’ opinions of whether Wiley had needed surgery over that of Nelle, who has no medical training whatsoever and her not wanting to sign the form would show she didn’t have Wiley’s best interests at heart!

Martin advises her to try to find some character witnesses that would speak well of her and promote her cause, and she knows exactly the person who she will ask!