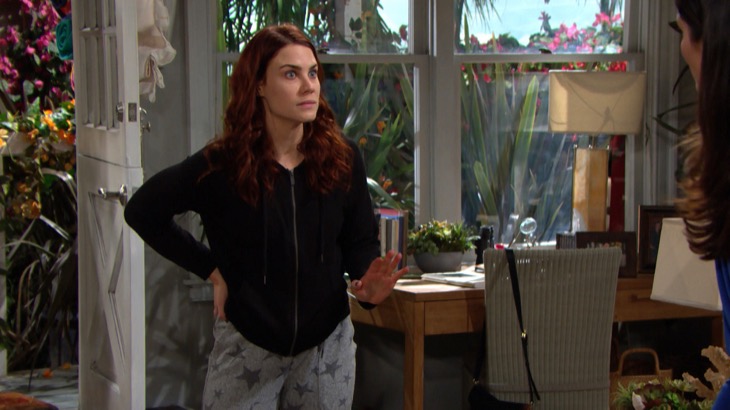 The Bold and the Beautiful spoilers reveal that Sally Spectra (Courtney Hope) has to deal with another complication in her plan. It seems that whenever she smooths out one ripple, another one pops up. So, what is she planning to do once Flo Fulton (Katrina Bowden) regains consciousness? Would she resort to committing murder?

B&B spoilers reveal that Flo knows that Sally’s sickness is just a scheme in order to get back Wyatt Spencer (Darin Brooks). She confronted the designer and told her the jig was up. However, just when Flo was about to contact Wyatt, Dr. Penny Escobar (Monica Ruiz) took drastic action to prevent Flo from making that phone call.

Penny ended up trying to help Sally by clobbering Flo with a candlestick. It stopped her from talking all right, but it caused another unexpected complication for Sally. Flo was knocked unconscious, which was the first problem. They also have to think of what to do once she wakes up. Then, Sally found out that Wyatt was on his way home.

The Bold and the Beautiful spoilers reveal that Flo and Penny struggled to figure out what to do with Flo’s body. They started dragging her through the living room before Wyatt got that door unlocked. Of course, we were left with a huge cliffhanger and don’t know what exactly Wyatt saw when he walked inside.

The Bold and the Beautiful Spoilers: Is Sally Spectra a Killer?

Hope spoke to Soaps.com about the cliffhanger and what is going through Sally’s mind. The actress made it clear that Sally does not like Flo at all. She also said that in Sally’s mind, she is trying to protect Wyatt from the blonde.

However, what is going to happen once Flo wakes up? Could Sally get so desperate to keep her secret that she kills Flo? That is unlikely, based on Hope’s interpretation of the character.

“I don’t think she’d kill or hurt anyone. She’s not malicious at heart. She’s not doing this to hurt Wyatt – in her eyes she’s trying to save him from this manipulative woman; she knows in her heart that she would love Wyatt harder and better than Flo ever would.”

Even though Sally probably won’t kill Flo, that doesn’t mean Penny won’t. Something has to be done to keep the young woman quiet, so how exactly does Sally plan on doing that? We will have to wait for new episodes to air to see what happens next.

General Hospital Spoilers: Nelle & Martin Plot Their Strategy For Family Court – How Far Will They Go?

Days Of Our Lives Spoilers: Kate Gets Abe Out Of Major PR Pickle, Proves Herself To Mayor