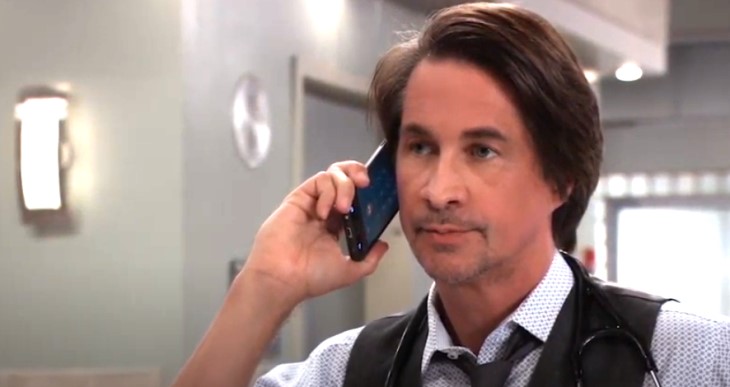 GH fans know that not long ago, Finn came over to Chase’s apartment to check-in. Once inside, he rapidly figured out that something was wrong and so asked Chase about it. GH viewers know that Chase began going through his completely premeditated story about how he had become disillusioned with Willow due to her obsession with Wiley Cooper-Jones (Erik and Theo Olson).

From beginning to end, Chase told Finn all about how he and Sasha began seeing each other behind Willow and Michael’s backs. Chase went on and on and gave lots of details about how his affair with Sasha had carried on for quite some time until Willow ultimately walked in on him and Sasha as they were in the process of kissing and undressing.

Of course, Finn just about immediately called Chase on what he viewed as a load of total B.S. As Finn said to Chase at the time, he’d heard the story … now how about Chase let him know what really happened?
GH viewers watched Chase bluster, get angry, and then try to throw Finn out of his apartment before he finally caved. Fans know he finally told Finn the truth when it became clear Finn wasn’t going anywhere.

Now, some viewers felt that this was one of the best GH episodes in recent memory. In fact, many GH fans practically jumped out of their chairs and off their sofas in exultation, ready to sing hallelujah, when Finn said and did precisely what many have been longing for. Many felt that it’s about time someone laid the verbal smackdown ever since the whole issue with Willow, Michael, Nelle Benson (Chloe Lanier), Chase, and Sasha began!

Well, it wasn’t quite as satisfying for fans when Carly confronted Sasha. That’s because everyone saw Carly push Sasha along without quite knowing the details a while back. In other words, Carly knew that Sasha was planning something to push Michael and Willow together. Carly just didn’t know what that something was precise. While it was nice to see someone pull the rug from under Sasha’s lying feet, it just didn’t have the power Finn’s confrontation with Chase did.

Many GH fans feel the issue with Carly confronting Sasha, even though it closely mirrored that of Finn’s meeting with Chase, is simply the fact that Carly is just as manipulative and just as much of a liar as Sasha, Nelle … take your pick.

The problem most GH fans see right now is the fact that Chase and Sasha are still bound and determined to carry on with their ludicrous, frankly idiotic scheme. Many viewers felt that Finn was especially correct in his observations and assertions regarding the stupidity of Chase and Sasha’s plot, the fact that if Chase hurried he might be able to rectify a horrible mistake, and that people were getting hurt that didn’t need to.

Of course, GH viewers watched Willow come by Chase’s apartment after Finn left to pick up her things. Chase had the entire time she was there to open his mouth and take Finn’s good advice. But did he? No. Chase and Sasha both kept up their pretense and proved just how completely out of touch with common sense these two GH characters really are.