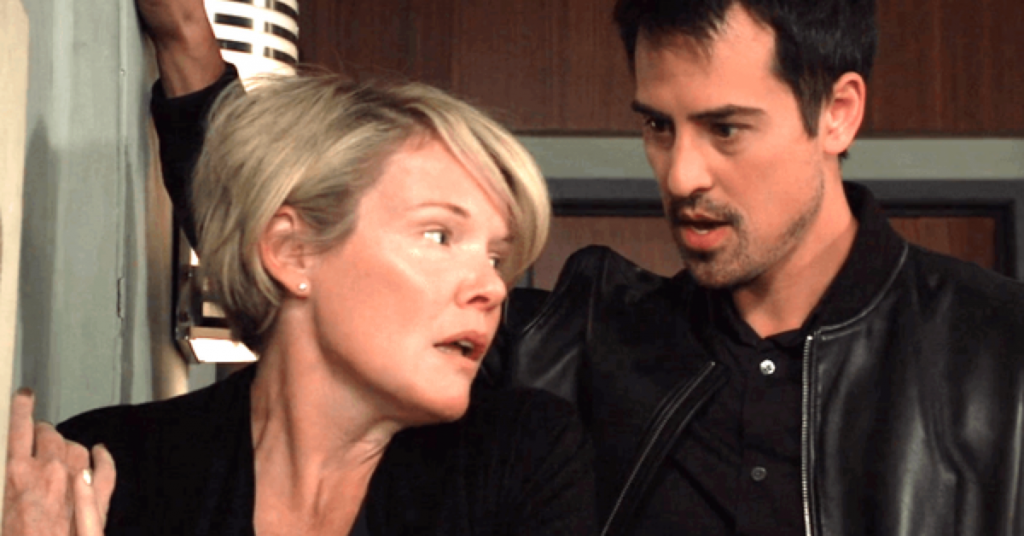 General Hospital spoilers for Monday, January 27 tease another day of exciting drama for GH fans full of confrontations and danger!

General Hospital viewers will recall from the last new episode broadcast that Charlotte Cassadine (Scarlett Fernandez) cut up the mock-up of the Crimson magazine cover with Sasha Gilmore’s (Sofia Mattson) picture on it, introducing the comeback of Deception Cosmetics, with Sasha as the spokesmodel.

As Lulu Spencer (Emme Rylan) comes to pick her up from spending the day with Nina Reeves (Cynthia Watros) she notices this and asks her what happened. Charlotte tells her Nina did it!

Nikolas Cassadine (Marcus Coloma) finally agrees to sign Ava Jerome Cassadine’s (Maura West) postnup agreement on the way home from France. He tells her he will sign it on one condition; that she remains a faithful wife and not cheat on him – while keeping their marriage sexless! Both sides agree, and Nikolas gets the codicil. Ava also tells Nikolas not to give up on mending his relationship with Spencer Cassadine (Nicolas J. Bechtel).

Michael Corinthos (Chad Duell) and Josslyn Jacks (Eden McCoy) talk at the docks, about the reappearance of Nelle Benson Archer (Chloe Lanier) in Port Charles, and the danger of her moving in with Brad Cooper (Parry Shen) with Wiley Cooper-Jones (Erik and Theodore Olson) there! Joss suggests that Willow Tait (Katelyn MacMullen) could revoke the adoption and take Wiley back, but Michael tells her it’s too late for that. He has a solution to the Nelle problem, he’s going to move her into the Quartermaine mansion so he can keep an eye on her. Joss opens her mouth and her mother comes out in full force, telling him he can’t, that she will kill him at the first opportunity! He tells her he’s got everything under control!

At the Metro Court, Sasha and Willow sit at a table and talk about Nelle, Brad, and Wiley and the situation at hand with Nelle moving into Brad’s apartment, and having access to Wiley! Willow is not at all comfortable with Brad raising Wiley on his own! Brad has been getting very absent-minded and overwhelmed with taking care of Wiley on his own, forgetting to turn his cell phone on and packing snacks for Wiley for daycare!

At the Metro Court, Nelle taunts Carly Corinthos (Laura Wright) about Jonah Corinthos, (Erik and Theodore Olson), while Carly comes back at Nelle with she’ll soon be back in Pentonville Prison. Nelle warns Carly she doesn’t know what she’s done or what she can do and threatens to blow her world apart, and Carly tells her to see what happens if she mentions Jonah’s name one more time!

In Brooklyn, Sonny Corinthos (Maurice Benard) and Jason Morgan (Steve Burton) watch Mike Corbin (Max Gail) flirt with a waitress while they sit at a table in a restaurant Mike used to frequent in the old days. They talk business, Sonny saying that the trial that he is trying to get Mike into for his Alzheimers has to work, and they talk about the signs that a turf war may be starting. Jason also tells Sonny he has been a great son to Mike.