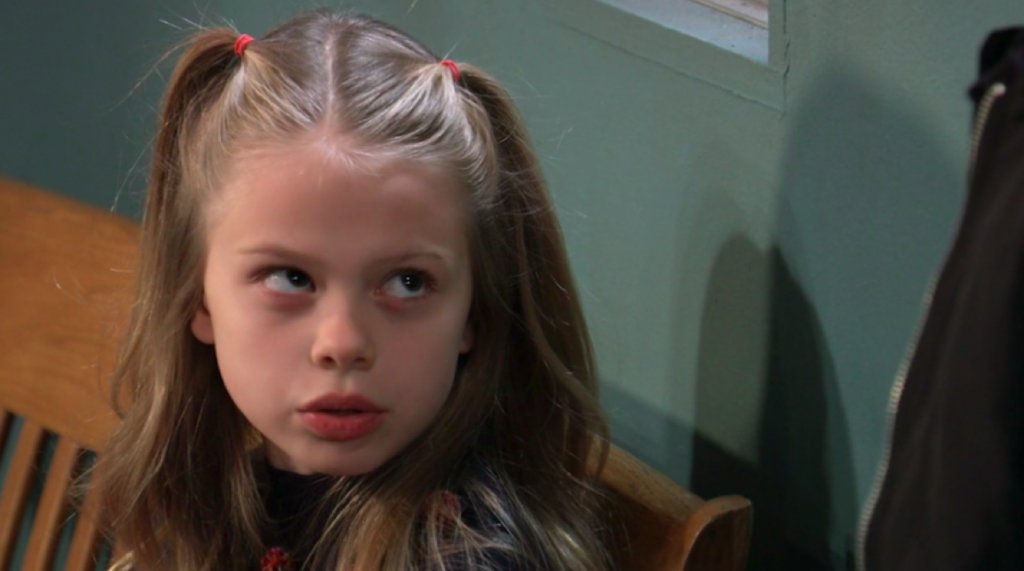 General Hospital spoilers for Friday, January 24 tease another exciting day for General Hospital viewers! These spoilers are for an episode that was originally scheduled to run January 21 but was pre-empted by the Donald J. Trump impeachment hearings so this will be the next new episode in the United States when regular General Hospital broadcasts resume.

Lulu Spencer (Emme Rylan) arrives at the offices of Crimson magazine where Nina Reeves (Cynthia Watros) has been taking care of Charlotte Cassadine (Scarlett Fernandez) where they have been making a collage. Lulu spots the mock-up for a Crimson cover for Lucy Coe’s (Lynn Herring) revived Deception ll Cosmetics Company cut to pieces! Lulu asks what happened and Scarlett tells her that Nina did it!

Nikolas and Ava Jerome Cassadine (Marcus Coloma, Maura West) are on their way back from France where they told Spencer Cassadine (Nicolas J. Bechtel) that his father was alive. At first, he was overjoyed to see him until he found out Nikolas had been “playing dead” for over three years and then he didn’t want anymore to do with him!

He didn’t care what Nikolas’ reasons were for how he handled trying to bring Valentin Cassadine (James Patrick Stuart) down or regaining the Cassadine inheritance, he had needed his father! Nikolas realized how he had felt when he was treated like the money, and him as the true heir was more important than him when he was young, and felt terrible about his treatment of Spencer.

Ava advised to let the boy have some space and then try again and see if he was ready to talk and let him explain his mistakes. Then she brought up the postnup. Nikolas agreed to sign it if she agreed not to run around on him and make him look like a fool or weak.

Josslyn Jacks (Eden McCoy) is on the docks near the Corinthos coffee warehouse talking to her older brother Michael Corinthos (Chad Duell) about Wiley Cooper-Jones, (Erik and Theodore Olson) and the dilemma of his safety, considering Nelle Benson Archer (Chloe Lanier) has been allowed by Brad Cooper (Parry Shen) to move in with him, and he is not seeming competent to care for the child by himself.

General Hospital viewers will recall that Michael recently had to pick Wiley up from daycare because Brad had forgotten to turn his phone on, and even offered to pay for a full-time nanny for Brad, which he turned down! Joss suggests that Michael should tell Willow Tait (Katelyn MacMullen) to revoke the adoption but Michael explains it’s too late.

Willow is also worried about Brad’s competency and the situation with Nelle, although Michael seems to have convinced her to move into the Quartermaine mansion so he could keep an eye on her, which Joss had thought was a terrible idea! She is sitting with Sasha at a table in the Metro Court talking over the whole situation with her and tells Sasha there is no way she can be okay with Brad raising Wiley on his own!

Meanwhile, Carly Corinthos (Laura Wright) is through with Nelle, as Nelle taunts her about Jonah Corinthos in another part of the Metro Court restaurant. She warns Nelle she’s had enough of her garbage as she claims she’s moving in with Michael at the Quartermaine mansion, which of course Carly doesn’t know about and tells her she’s a liar. She also dares her to mention Jonah’s name one more time and she’d see what happens!

Sonny Corinthos (Maurice Benard) and Jason Morgan (Steve Burton) discuss business in Brooklyn in a restaurant that Mike Corbin (Max Gail) used to frequent as Sonny talks about this Alzheimer’s trial being his father’s last hope and it had better work! Meantime, Mike flirts with a waitress as they also discuss the turf war that seems to be impending.