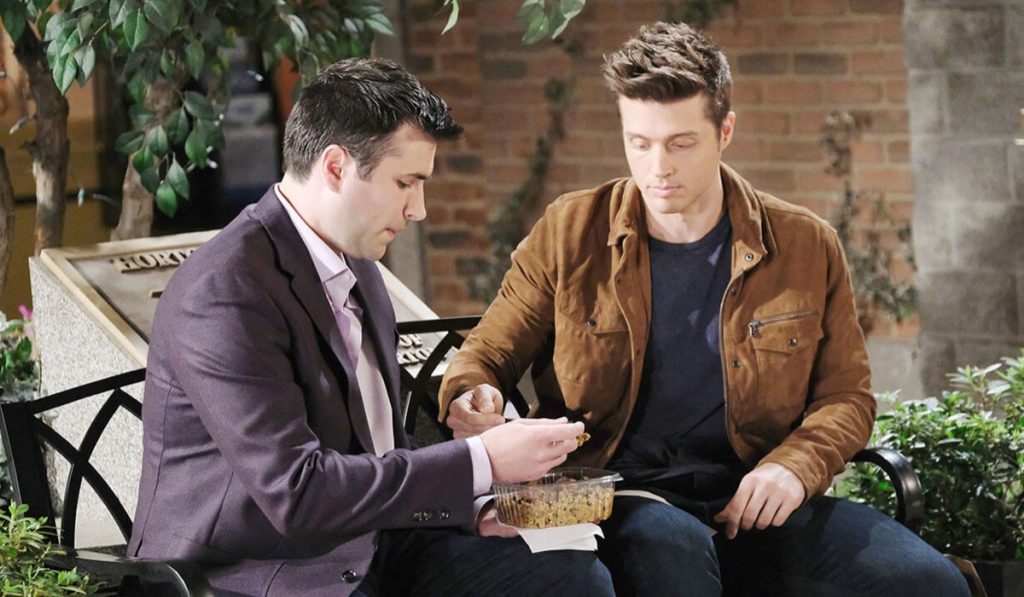 As Days of Our Lives viewers found out last week, Will Horton (Chandler Massey) was framed for the death of Adrienne Kiriakis (Judi Evans) which was actually caused by Maggie Kiriakis (Suzanne Rogers) driving drunk. 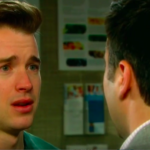 The week before last, Victor Kiriakis (John Aniston) under pressure from Ciara Brady (Victoria Konefal) admitted to her that he and Xander Kiriakis (Paul Telfer) had framed Will for the accident.

Ciara immediately headed for the prison to pay Will a visit and tell him what she had found out, and now they must make a decision as to whether they should come forward with the truth.

Meanwhile, newly divorced Sonny Kiriakis (Freddie Smith) and Evan Frears (Brock Kelly) grow closer, in spite of both Arianna Horton’s (Sydney Brower) and Kate Roberts’ (Lauren Koslow) distrust of him. As Days of Our Lives viewers will recall, Kate was even having a background check done on Evan, who is Detective Rafe Hernandez’ (Galen Gering) “manny” who takes care of baby James Ridgeway (Kyler and Caleb Ends). But, since the divorce papers have apparently been filed and Sonny is a free man, with Will’s urging to move on with his life, he’s moving on. But will the truth that Will didn’t cause Adrienne’s death impact Sonny’s decision to move on – if Ciara and Will decide to come forward with the truth? That’s the question!

Kristen DiMera (Stacy Haiduk) decides to stir up some trouble for Eric Brady (Greg Vaughan) and Nicole Walker (Arianne Zucker). Since Brady Black (Eric Martsolf) and Nicole are pretending to be together, even though Brady’s heart isn’t in it and he’s just going along with the ruse, chances are that Kristen decides to inform Eric that he has lost his chance with Nicole forever and that she’s back with Brady.

Days of Our Lives Spoilers: Will and Ciara Both Conflicted – Expose Killer or Stay Silent To Save Salem? https://t.co/zLdoRH5svy pic.twitter.com/YtDG2cNYtZ

Kristen still wants Brady but he’s not sure who or what he wants, apparently. However, they did share a child together so that experience, even though it didn’t work out as they hoped it would, gives them a commonality that is difficult to deny.

Last week, Days of Our Lives viewers found out the truth about whose baby died, and it wasn’t Kristen’s after all, although now the baby known as Mackenzie “Mickey” Horton will die of neuroblastoma unless a bone marrow transplant is performed, which is her best shot at life.

Kristen finally convinces Brady to talk about the day their daughter died with each other, and as they grieve together, the experience makes their bond complete. Brady won’t need a fake relationship with Nicole anymore because he won’t have a desire to keep Kristen at arm’s length.

The Bold and the Beautiful Spoilers: Wyatt At A Crossroads – Should He Pick Flo Or Sally?