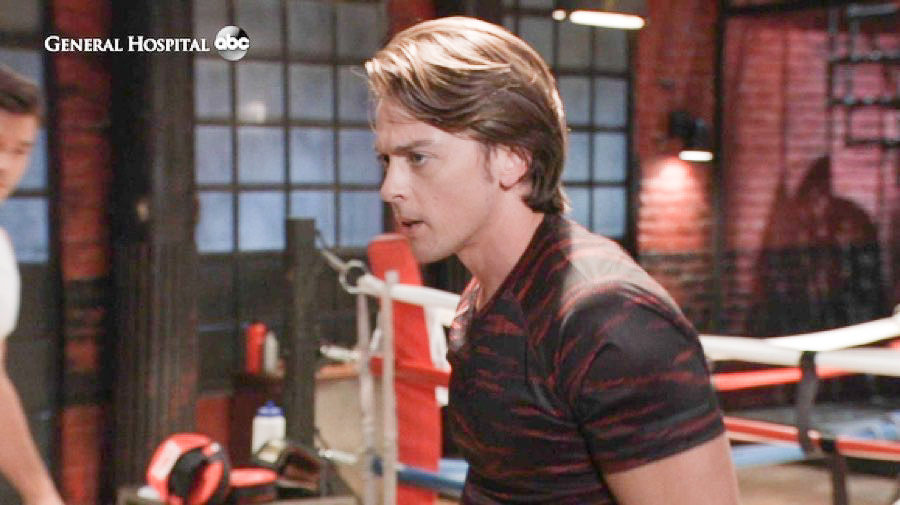 Michael is frustrated after talking with Willow Corinthos (Katelyn MacMullen) about their marriage, and Wiley Corinthos (Erik and Theodore Olson). His former friend Harrison Chase (Josh Swickard) arrives and offers to help out, but with their friendship on the rocks, he may not want to be standing in the way of Michael’s punches today. Michael punches away, as he remembers his earlier conversation with Willow. She told him she wanted to be Wiley’s mother no matter what happened between the two of them.

Michael had told her he wanted that too. He then told her that he supposed there wasn’t any rush to figure things out between them. After all, Wiley certainly isn’t old enough to wonder what the nature of their marriage is. Michael continues to punch the punching bag, trying to work out his frustrations. Chase walks into the gym and notices him.

Chase continues to try to talk Michael into boxing with him. He says to him come on, what do you say? He claps his gloves at him. Michael finally concedes, and tells him to proceed at his own risk! What Chase doesn’t realize is that he is part of the problem. Since Chase “slept with” Sasha Gilmore (Sofia Mattsson) two hearts were broken – Michael’s, and Willow’s. Michael is probably frustrated because every time Chase comes in view and Willow sees him, Michael can see the hurt in her eyes although he tries to hide it. He still is angry with Sasha, deep down.

Michael and Willow are starting to become close, but until they can really move on from Sasha and Chase, respectively, they cannot move forward. It’s not fair to each other. Right now it’s a marriage in name only, but for the future, it would be better for Wiley if his parents were truly married in every way. Chase and Michael cannot just jump back into a friendship any more than Sasha and Willow could. And Michael is afraid that if he and Chase try to pretend the elephant in the room isn’t there, he might really put a hurting on Chase in the boxing ring!