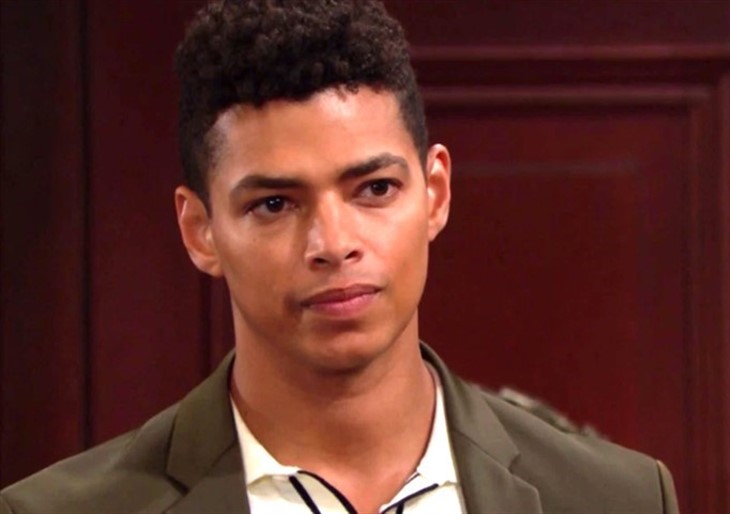 CBS The Bold and the Beautiful spoilers reveal that during the week of October 26, Zende Forrester Dominguez (Delon de Metz) gets an unexpected visit in Los Angeles. The fact that he is still technically married, although it’s rocky, and him getting closer to Zoe Buckingham (Kiara Barnes) leads one to wonder if the surprise guest is his wife, Nicole Avant (Reign Edwards).

The Bold And The Beautiful Spoilers – Still Married To Nicole Avant

B&B spoilers reveal that in the new issue of Soap Opera Digest, de Metz said that Zende is still married, even though it is rocky. As fans recall, when Zende first arrived back at Forrester Creations, he had a conversation with Eric Forrester (John McCook). While Zende wouldn’t talk about what led to his marriage trouble, he seemed really conflicted. He also said that he wasn’t sure what to do or what the future would hold.

Then, Eric mentioned that it sounded like Zende and Nicole still had love. That was a pretty big anvil that his marriage might not be over like he thinks it is.

Even though Zende has only been back for a short time, he is already getting involved in a complicated situation. He’s getting close to Zoe and allowing her to flirt with him even though she’s dating Carter Walton (Lawrence Saint-Victor). What makes this even worse is that not only is Zoe with Carter, but the COO is Zende’s best friend. Yet, neither of them are being honest with Carter, which is only going to hurt him worse in the end.

The Bold And The Beautiful Spoilers – Zende Forrester Dominguez’s Dilemma

The Bold and the Beautiful spoilers reveal that de Metz said to the magazine that Zende is really in a complicated dilemma. He is falling for Zoe and is even going to offer to help her get into the music business. However, Carter isn’t the only person he has to worry about. There is someone else that is coming. In fact, SOD specifically stated that Zende gets an unexpected visitor and we have to assume it’s his wife, Nicole.

A few months ago, executive producer and head writer Bradley Bell said that we would see the return of a few members of the Avant family. He specifically teased that it would happen in fall 2020 and there would be “appearances,” not a long-term return. We recently heard that Karla Mosley said goodbye to her character, Maya Avant. However, nothing has been said about Nicole.

So, it’s very possible she comes to L.A. to talk to Zende about their marriage. It will also put him in a double love triangle — one with Carter and Zoe and the other between Zoe and Nicole. We have a feeling that this is going to get very messy.