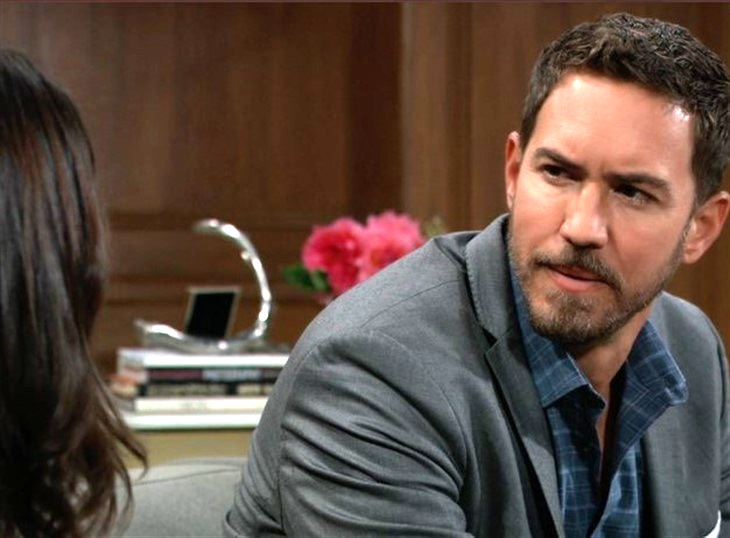 Peter told Anna that he had a genetic code for Rheumatoid Arthritis, after telling Anna he and Maxie Jones (Kirsten Storms) were getting married. He assumed it came from his father since Anna told him it didn’t come from her. However, Alex is her identical twin; identical twins have identical DNA. If Anna doesn’t have a gene for rheumatoid arthritis, then Alex cannot either! Anna does have a blood disorder that requires her to go for phlebotomy, but polycythemia vera is not genetic, and Alex doesn’t have it.

Anna went digging in her computer and as Dr. Hamilton Finn (Michael Easton) came home, she explained she may have a way to prove who is Peter’s mother. He assumed it must have skipped over his late half-brother Nathan West (Ryan Paevey), but with a genetic disorder, that is not likely if it came from Faison.

His paternal half-sister, Britt Westbourne (Kelly Thibaud) was the one who performed the genetic test, and she mentioned nothing about the possibility of it coming from their father so it had to come from somewhere else! Perhaps, Anna is thinking that Peter’s father wasn’t Faison after all – but someone else who she knew for certain that Alex had slept with and she had not. That person is Valentin Cassadine (James Patrick Stuart)!

General Hospital viewers may recall that Dr. Griffin Munro (Matt Cohen) ran a DNA test on Peter several years ago. That is how the match to Faison came up. However, at that time the unscrupulous Dr. Brad Cooper (Parry Shen) headed up the lab at General Hospital, and Dr. Liesl Obrecht (Kathleen Gati) conspired with Brad to alter Finn’s drug test at about that same time. To make a long explanation short, the lab was not the most honest place to have tests done at that time.

The DNA test supposedly showed a match between Faison and Peter, but it could have been altered or mistakes could have been made. The latter is the better of the two possibilities. And General Hospital may just be changing history again to fit a new storyline– they have done it before and not that long ago. Historically, Jason Morgan (Steve Burton) was a single birth, not a twin. Yet, it was revealed he and Drew Cain (Billy Miller) were separated at birth! One thing is certain. When Anna (and Alex) first met Valentin, he was suffering from scoliosis and went by the name Ivan Theodore.

They were all in spy school at the same time. (That is another change of history, Alex was introduced in “All My Children” and she and ANNA had been separated at birth and never knew of one another until they became adults. Alex, however, had been brainwashed to believe she was Anna, and also to kill her. That part would be consistent with the General Hospital’s memory mapping storyline). Valentin and Anna talked things out about who he had the affair with a couple of years ago when she was trying to get straight whose memories she was having.

Out of those conversations, GH spoilers show he realized it was Alex posing as Anna who he’d fallen in love with; and slept with! If he was the one who impregnated her, he never knew it. If he thought Peter was his he’d have never given him to Faison! The genetic proof that Anna is thinking of is Valentin’s scoliosis; it can be caused by childhood rheumatoid arthritis! Anna will have a dilemma, however.

If she gets Valentin’s and Peter’s DNA and they show a father and son match, she will have to decide whether to tell the secret or not. If she tells Valentin, he will be heartbroken that he gave his own son to Cesar Faison. If she tells Peter, however, he will be relieved that he is not the spawn of the devil he is thought to be!

Stay tuned to GH, and keep checking General Hospital soap spoilers frequently for all the latest news, updates, and rumors!