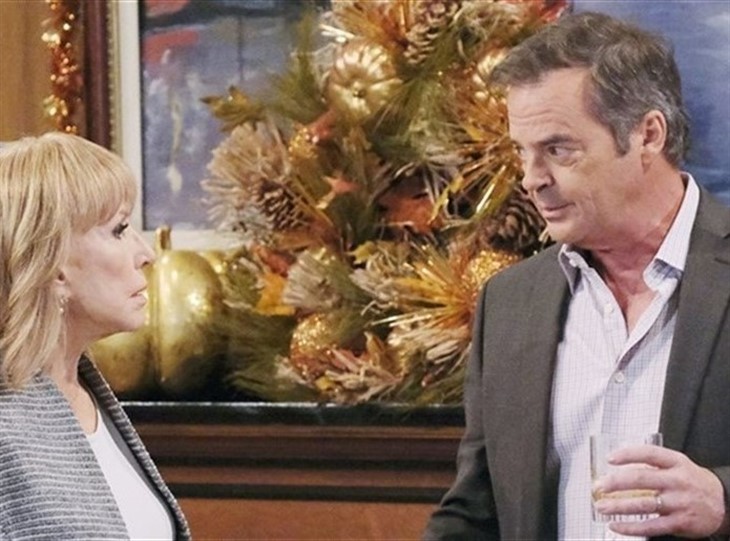 Olivia had left Ned several messages letting him know that her trip to Geneva, Switzerland to see her son Dante Falconeri (Dominic Zamprogna) would take longer. Since he didn’t get her messages but did get a call from the hotel in Monte Carlo where Robert Scorpio (Tristan Rogers) and she had gone afterward (because she left her phone and her purse in the room) he assumed she’d run off with Robert! Alexis was still reeling from Neil Byrne (Joe Flanigan) having died in her bed; they spent a night commiserating at The Floating Rib.

That night turned into a drunken night of drunken sex! Now, his guilt is compounded by Olivia’s being extra kind and understanding of him, and also his knowledge that Alexis had fallen off the wagon again! Ned just wasn’t thinking – in the back of his mind, he knew Alexis had a drinking problem and here they got drunk together. He also wasn’t thinking when he went home with her!

The guilt becomes too much for Ned, and he has to talk to someone about what happened. He’s doubly guilty about the affair, and about enabling Alexis to fall off the wagon! He also feels guilty about kicking Brook Lynn out of the house – she may not have gotten her throat cut by Nelle Benson Jerome (Chloe Lanier) if he hadn’t. She’d gone to the Nurses’ Ball – where she was supposed to perform, but not that early – because she had nowhere else to hang out!

He hasn’t been able to convince her to forgive him or to move back into the Quartermaine mansion! He catches Monica, at home all the time now since Cyrus Renault (Jeff Kober) fired her from General Hospital. He tells her they need to go into a not often used room of the mansion for privacy, and that he needs to talk. Monica is technically his aunt by marriage, having been widowed by his late uncle Alan Quartermaine (Stuart Damon).

But he talks to her like a mother figure. Monica has become the matriarch of the Quartermaines since Ned’s own mother, Tracy Quartermaine (Jane Elliot) is living overseas with her husband Luke Spencer (Anthony Geary). He tells her everything that is troubling him, including about his infidelity! Monica is no stranger to affairs herself, so she understands without judgment. However, she knows from experience that keeping secrets doesn’t do a body good and will advise Ned accordingly!