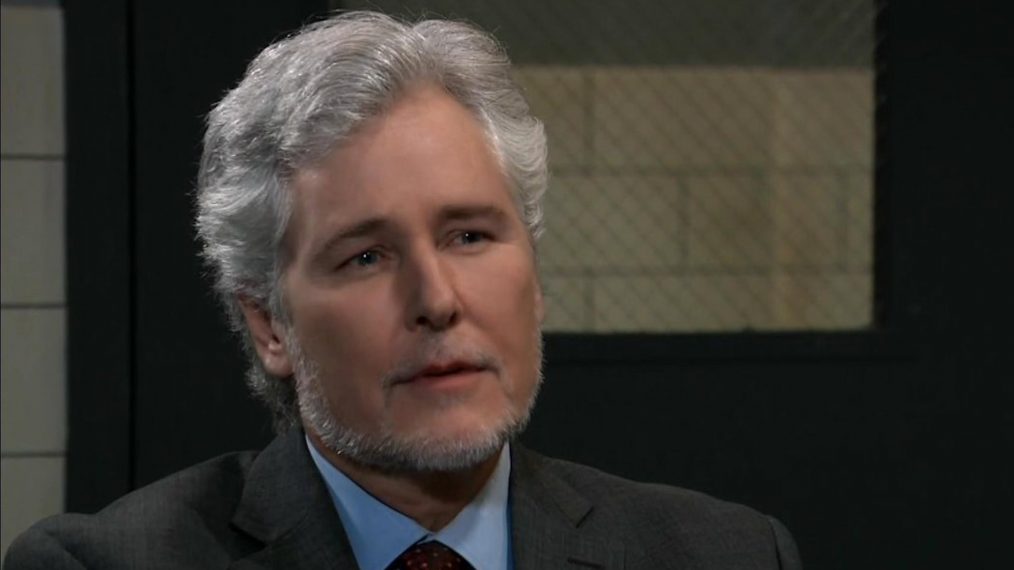 General Hospital spoilers tease that Attorney Martin Gray (Michael E. Knight) will stay close to Valentin Cassadine (James Patrick Stuart), in upcoming episodes of GH, because he’s not sure whether to trust his client!

GH Spoilers: Valentin Cassadine Has Taken His Attorney Into Some Rather Questionable Situations

For one thing, Martin did make a joke about there being some “Gray” areas, but Valentin bringing him along on a break-in of Ava Jerome’s (Maura West) gallery was a little over the top! Martin was a just a tad uncomfortable with being an accomplice to a crime that time, especially when that masked man came in and got in a fight with Valentin, which of course turned out to be Nikolas Cassadine (Marcus Coloma) in his Halloween costume!

General Hospital Spoilers: Valentin Cassadine Tried To Snatch Charlotte Cassadine And Go On The Run With Her

After his wedding (and his life) fell apart, Valentin tried to snatch his daughter Charlotte Cassadine (Scarlett Fernandez) and go on the run with her, and that didn’t exactly impress Martin either! All of this is giving Martin the impression that perhaps Valentin is not to be trusted! Perhaps it’s Martin who has not asked for bail for his client yet after he was arrested in previous episodes of General Hospital, because even he is afraid Valentin might be a flight risk!

Martin does have a copy of the codicil apparently given or faxed to him by Ava, and it has been authenticated but what he doesn’t know is if the person who authenticated it was paid off to judge it as authenticated or not! Valentin wants Martin to find out if it’s a fraud or if it’s legitimate, and he will certainly work on that.

General Hospital viewers have not been allowed much of a peek at the document, but obviously if it were to mention Nikolas by name, then it’s a fraud. Mikkos Cassadine (John Colicos) was dead and gone by the time Nikolas was born, and with Nikolas and Ava working together, and even married now, how does either Martin or Valentin know to trust the legitimacy of the document? Either one of them could have forged it, and no one knew it existed until Nikolas “came back from the dead!”

GH Spoilers: Did Helena Cassadine Herself Forge The Codicil?

There is a better than even chance that Helena Cassadine (Constance Towers) herself could have even forged it, signing Mikkos’ name to it! Remember, Valentin made a valid point when he said that Helena hated him and she told Luke Spencer (Anthony Geary) that she feared Valentin, calling him the most evil Cassadine of all! Yet back then, to Luke, she called Valentin a Cassadine, and the codicil says that he’s supposedly her son, therefore not a true Cassadine but only a stepson of Mikkos? That could be a clue right there that Helena forged this codicil!

Martin will continue to stay close to Valentin, not being sure that he can trust him or not. He will help him to find out if the codicil is a forgery, especially given that Ava, Nikolas’ new wife, faxed him a copy so willingly, but he is probably not going to try to get bail for him. Valentin is just too sneaky to put his trust in him!