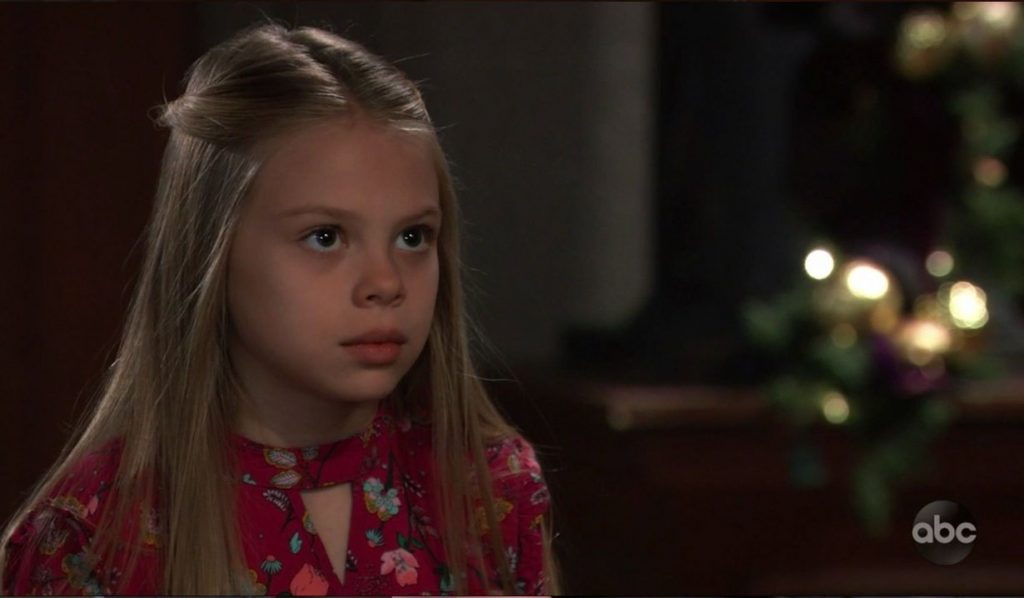 General Hospital (GH) spoilers tease that Lulu Spencer (Emme Rylan) is going to file for sole custody of Charlotte Cassadine (Scarlett Fernandez), her daughter with Valentin Cassadine (James Patrick Stuart). But Lulu may have underestimated how devoted Charlotte is to Valentin.

Charlotte and Lulu are finally getting along

Lulu didn’t find out Charlotte was her daughter until well after the little girl was born. Lulu’s eggs were stolen and Helena Cassadine (Constance Towers) had one of them fertilized by Valentin. A woman named Claudette Beaulieu (Bree Williamson) was the surrogate that carried Charlotte to term. So when Lulu and Charlotte finally met, they didn’t get along all that well.

It took a bit of time, but Lulu eventually won Charlotte over and they became mother and daughter for real. But Charlotte has always doted on her father, and he on her so if Lulu tries to take away Valentin’s parental rights in court, she may just find herself at odds with her daughter once again. But Lulu is in a difficult position, because Valentin has committed some pretty awful crimes.

Pushing Ava off the parapet

Valentin is willing to commit murder for his own purposes. Although she may have deserved it, Valentin murdered Cassandra Pierce (Jessica Tuck) after she kidnapped Charlotte. He also recently pushed Ava off the parapet at Wyndemere. She might have died if she hadn’t been rescued by Nikolas Cassadine. So despite how much Valentin and Charlotte love each other, Lulu can’t ignore Valentin’s crimes.

Will Lulu pursue full custody of Charlotte? Will this alienate her daughter or will Charlotte understand? Only time will tell, so stay tuned to General Hospital airing weekdays on ABC. And don’t forget to check back here regularly for all your General Hospital news, information and spoilers!