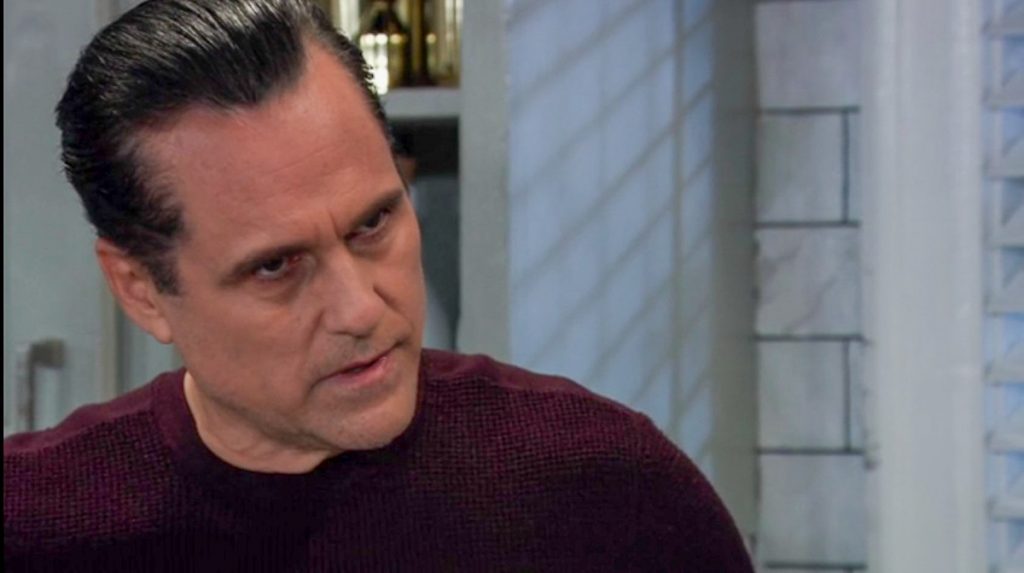 In the Corinthos kitchen, Sonny Corinthos, (Maurice Benard) has a little surprise for Gladys Corbin (Bonnie Burroughs) as he approaches her and tells her in his most threatening, insinuating voice! She backs up from him nervously, but it’s probably not that kind of surprise, although she did get a little too nosy for Sonny’s taste in Tuesday’s episode. It’s probably just something he’s thinking about doing for Mike Corbin (Max Gail).

Lulu Spencer (Emme Rylan) is ready for war as she shouts to her mother, Laura Collins (Genie Francis) and Nina Reeves (Cynthia Watros) that Valentin Cassadine (James Patrick Stuart) is never getting anywhere near Charlotte again! As General Hospital viewers will recall, he tried to snatch Charlotte and go on the run, even punching Peter August (Wes Ramsey) in the gut to make his escape with her in Tuesday’s episode, and Lulu came in just as Peter was getting up off the floor in front of a shocked Maxie Jones (Kirsten Storms)! Nina looks worried that she may never see Charlotte again, as well!

At the Port Charles Police Department, Valentin is adamant that his constitutional rights have been denied him as he tells District Attorney Robert Scorpio (Tristan Rogers) that he thinks Robert will follow the law and let him go! Commissioner Jordan Ashford (Briana Nicole Henry) arrested him herself and charged him with fraud and tampering with a corpse! It sounds like he’s not even being given bail and his attorney, Martin Gray (Michael E. Knight) seems to have gotten out of Dodge and hasn’t been seen since Nikolas Cassadine (Marcus Coloma) barged in on the wedding and brought it to a grinding halt!

Meanwhile, Carly Corinthos (Laura Wright) brings Alexis Davis (Nancy Lee Grahn) and Sam McCall (Kelly Monaco) some shocking news! She tells them that Nikolas, who is Sam’s cousin and Alexis’ nephew, is alive and well and in Port Charles, and that he resurfaced last night – well, publicly, anyway. It’s a good thing that Alexis knows, because Nikolas is probably going to need a lawyer soon! There is a codicil to authenticate, possibly a guardianship to be amended, and numerous other legal paperwork regarding Nikolas taking back his inheritance from Valentin!

Ava Jerome Cassadine (Maura West) has a rude awakening the morning after she and Nikolas’ wedding night! He points a gun at her as she wakes up in bed and says, “Are you looking for this?” Ava shouldn’t get too happy thinking she can outsmart a Cassadine who is actually acting like one! For one thing, the marriage may not even be valid if Nikolas didn’t divorce Hayden Barnes (Rebecca Budig) off screen!

The Bold and the Beautiful Spoilers Wednesday, January 8: Liam Storms Out When Hope Won’t Give Up Douglas – Thomas Flips Out Over Marriage Proposal