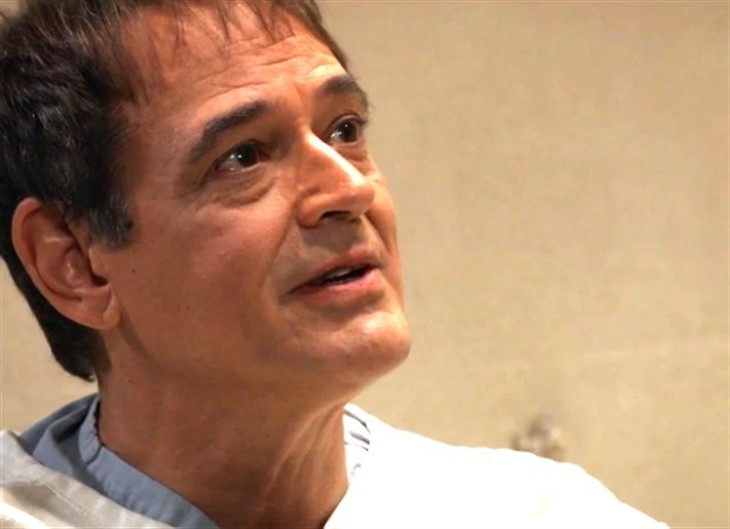 General Hospital spoilers tease that in Port Charles Kevin Collins (Jon Lindstrom) will share bad news with Laura Collins (Genie Spencer) on an upcoming episode of GH; how will she react?

General Hospital viewers will recall that Laura had a big scare at the site of the Floating Rib explosion. Lulu Spencer (Emme Rylan) was trapped under debris, and Mac Scorpio (John J. York) had to hold Laura back from rushing into the nearly collapsing building to find her daughter. Dante Falconeri (Dominic Zamprogna) was able to get in and find Lulu and help her out of the rubble and get her to General Hospital.

There, she was to get herself checked out and make sure she was okay before she went in to see her boyfriend Dustin Phillips (Mark Lawson) who was critically injured. Dante went in to check on him for her, and unfortunately came out and had to give her terrible news as she sat with Laura outside the room where Dustin was taken. He didn’t make it, but his last words were to tell Dante to take care of Lulu, and gave him the engagement ring he was planning to put on her finger when the explosion happened.

The big question is, what will the bad news be that Laura’s husband has to give her – will Lulu be all right? Will someone else Laura loves who was in the explosion be all right, namely Cameron Webber (William Lipton)? He appeared to have a broken leg, and although he and Laura are not related by blood, Elizabeth was married at one time to Laura’s son Lucky Spencer (Jonathan Jackson), so they have a grandmother-grandson relationship.

General Hospital fans know that Lulu’s portrayer, Emme Rylan, had to leave the show about a month ago and although she couldn’t discuss “work” she did say it wasn’t her choice. GH writers will have to write Lulu off the canvas somehow, although it is not yet clear whether the character of Lulu will be “rested”, in other words, off-screen for a period of time, or “killed off” – no definition needed!

Elizabeth will lean on Scott Baldwin (Kin Shriner) the same day that Kevin gives Laura bad news, so it could either be about the same scenario, or two different ones. Franco Baldwin (Roger Howarth) was also seriously injured, with a head injury on top of the brain tumor that has returned. He had to have surgery, and the doctor told Liz he had good news, and he had bad news! The bad news could make Liz lean on Scott, but with Franco incapacitated so could bad news about her son Cameron, and that would affect both Liz and Laura! Kevin works in the hospital as a psychiatrist and so he would probably be the one who gets whatever the bad news is to inform Laura as her husband.

Laura is having to deal with the mayor’s duties in responding to a crisis that would affect the Port Charles Public. Lulu may not have had herself checked out thoroughly and she could have internal injuries that could become worse, and possibly fatal. Cameron’s broken leg could set off a blood clot that could go to his brain and kill him! Neither one is mentioned in upcoming spoilers for next week, so it could be either one of them! Obviously, Laura will be devastated either way, but it will affect her much worse if Lulu dies! Either way, she will also be angry once she finds out the blast was intentionally set and be out for blood!