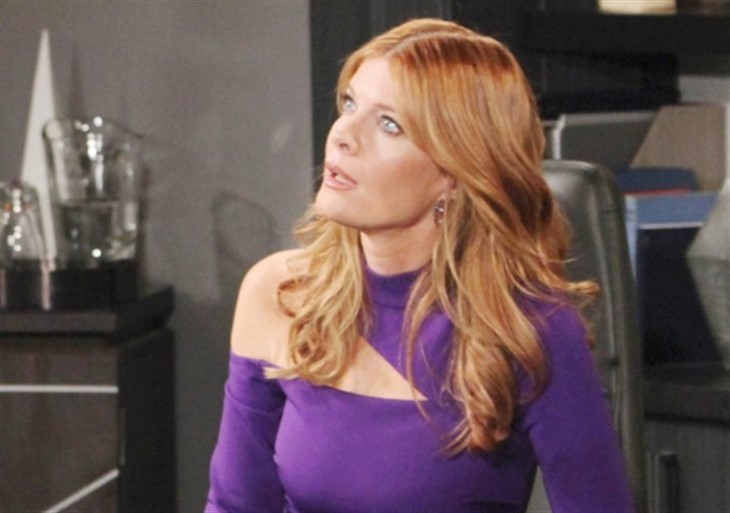 CBS The Young and the Restless spoilers document that in Genoa City, Wisconsin Phyllis Summers (Michelle Stafford) knows that her grand comeback vehicle is in danger of being held long-term by a hostile force. Red is obviously not okay with that and is trying to create a fierce response.

In the meantime, Devon Hamilton (Bryton James) accepted his Chamber of Commerce award before later knocking his cousin to the ground with a punch that hit its intended mark. Nate Hastings (Sean Dominic) will have a welt on his face as a result. It’s one his guilt-ridden mind will accept.

The seemingly doomed hotel, that Phyllis still believes represents her redemptive vehicle, continues to be unable to escape controversy.

Phyllis thought that she’d pushed trouble out the front door by buying Abby Newman’s (Melissa Ordway) half-stake in the Phoenix. But that wasn’t the case, as Abby was working a rival deal.

Abby’s purchase of a plot across the street, done to create a spite hotel, hasn’t materialized due to Phyllis’ planting of ancient bones that were obtained through the internet. But Victoria Newman (Amelia Heinle) did her sister one better.

Victoria’s skillful move worked. Her financial swoop pulled control of the Grand Phoenix from Phyllis’ clutches. Now, with no seeming room to operate, Stafford’s character must think even more creatively.

Let’s consider what just happened at an event that she thought was a winner before further detailing Phyllis’ plight. Nick Newman’s (Joshua Morrow) kind suggestion that the Phoenix serves as the Chamber’s venue put some desperately needed cash into his significant other’s pocket and enabled positive connections.

However, as Y&R viewers saw, Elena Dawson (Brytni Sarpy) was overcome by the weight of what she and Nate recently did. Devon’s pressing questions eventually caused Elena to admit the truth in their hotel suite. James’ character then returned to the main lobby and knocked Nate to the floor while everyone gawked.

Vickie might choose to retain control of Phyllis’ debt indefinitely. So, it’s not as though the hotel is in danger of imminently going out of business, though it could.

The Phoenix became a source of curiosity for travelers after it first opened. Social media buzz tagged it as a trouble spot, drawing various onlookers. So, maybe Phyllis could play up that angle again in some form in hopes of increasing business.

If a bold move like that isn’t made, or some other unforeseen dynamic doesn’t change, then Phyllis will remain under Victoria’s thumb. That’s clearly a place where she can’t stand being and will do all that’s possible to correct using whatever means are necessary on Y&R.