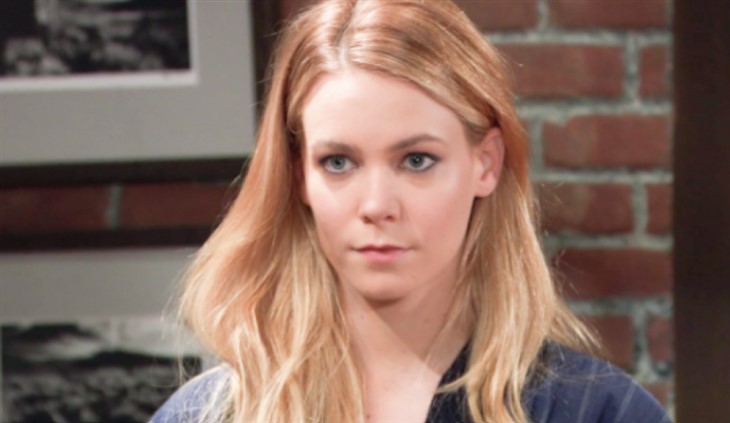 ABC General Hospital updates and spoilers reveal Michael Corinthos (Chad Duell) is married to Willow Tait (Katelynn MacMullen). Nelle Benson (Chloe Lanier) is now married to Julian Jerome (William DeVry). However, neither of them married for love. Will Nelle target Willow because she wants Michael back?

General Hospital’s Nelle targeted Michael and his family because her father sold her kidney to Jasper Jacks (Ingo Rademacher). After Nelle managed to turn everyone against her she targeted Michael to cause issues with his family. Nelle didn’t care about Michael at all, she just wanted to hurt Carly Corinthos (Laura Wright) who had nothing to do with the issue at all. When Michael broke things off, Nelle tried to kill him. Nelle went as far as to give away Michael’s child to get revenge on him. Nelle is evil and everyone should know that.

Because of Nelle giving her child to General Hospital’s Brad Cooper (Parry Shen), Wiley Quartermaine Corinthos (Theo and Erik Olson) is very close to Willow. Lucas Jones (Ryan Carnes) believed that Willow was Wiley’s birthmother and allowed her to become very close to him. Nelle is certain to be jealous of the relationship her son has with Willow, his new stepmother. Nelle has run off every prospective date Michael her had since their breakup. Now that Willow is married to Michael, Nelle is sure to want revenge. Willow marrying Michael has put a huge target on her.

General Hospital’s Nelle allowed Ryan Chamberlain (John Lindstrom) to stab her so she would be released from prison. Nelle is completely mental and is extremely good at hiding it. However, Nelle’s next step will be going after Willow because she wants Michael back for herself. Nelle will be convinced that she’s doing this for her son but Wiley doesn’t even know Nelle.

Now that Michael and Willow are married, Nelle knows they have a chance at falling in love. Nelle isn’t about to stay for Michael being with someone else. Nelle will target Willow to get her out of Michael and Wiley’s life.

General Hospital’s Nelle could believe that Michael still loves her because she gave him a son. Nelle believes that no one should say not to her and she is entitled to a good life. Nelle thought she would have everything she wanted when Michael married her.

After all, Nelle even sent Carly to Ferncliff for attempted murder. Nelle can’t get Willow sent to prison or Ferncliff. Nelle will likely try to kill Willow to get her out of Michael and Wiley’s lives.

Will Nelle succeed in getting rid of Willow? Will Nelle end up losing at her own game yet again?