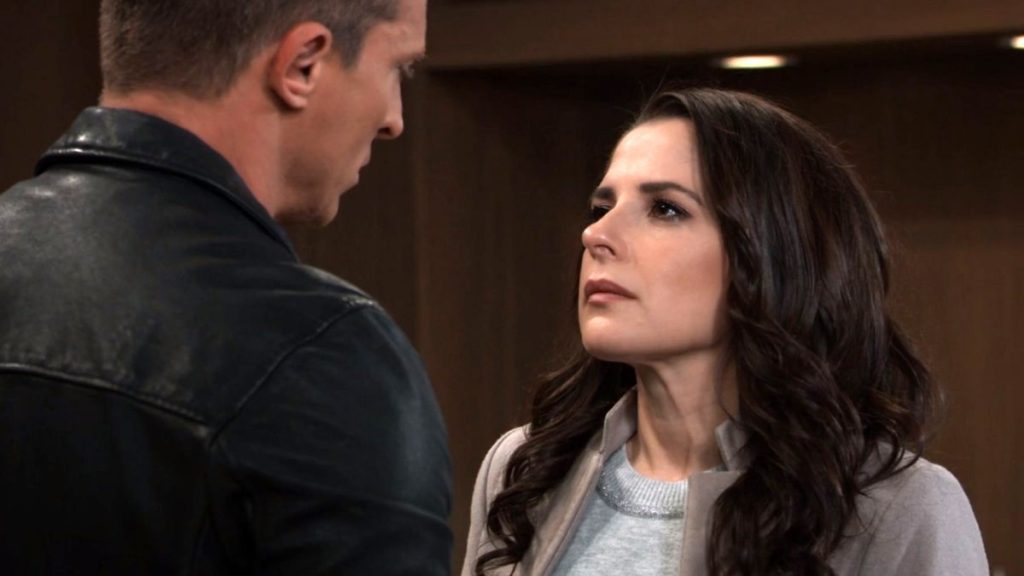 General Hospital (GH) spoilers tease that Samantha McCall (Kelly Monaco) may finally have to face the facts regarding the restrictions of her parole from Pentonville. Sam had previously been sentenced to two years in prison for killing Shiloh Archer (Coby Ryan McLaughlin) but scores very early parole likely due to prison overcrowding.

Sam was desperate to get home to her kids, and her hopes were realized with a Christmas release. But Sam’s bubble quickly burst after she met with her parole officer for the first time. One of the conditions of her parole was that she can’t see Jason Morgan (Steve Burton), who is a convicted felon.

Sam wanted to fight the restriction, or sneak around. Carly Corinthos (Laura Wright) even set up a meeting at Sonny’s house where they could meet in secret. They also came up with a plan to make a deal with Robert Scorpio (Tristan Rogers).

Sam and Jason met with Robert and offered him a deal. They would find evidence so that Robert could arrest Peter August (Wes Ramsey) for his many crimes. Peter was the one who created false evidence that made it look like Sam murdered Shiloh in cold blood rather than to protect Jason. Shiloh had been blackmailing Peter to help him escape from prison but Peter’s evidence made it look like it was Sam who masterminded Shiloh’s release so she could kill him herself.

Sam befriended Hamilton Finn (Michael Easton) and convinced him to tell her anything that could help her get the evidence she needed. Finn eventually came through, but the Attorney General put a stop to the deal after receiving a call from Peter. So now Jason and Sam are back to square one.

Sam has been reluctant to stay away from Jason, but a close call with her parole officer brought home the point that if Sam gets caught violating her parole, no matter how unfair, it will be her children will suffer. Sam has her kids and her freedom, so she needs to be grateful for that focus on her kids.

GH Spoilers – Back to Prison

If Sam violates her parole, she will end up separated from her children once again. As painful as it might be both Sam and Jason have to realize that they can’t keep taking risks. What will life look like for Sam without Jason? Perhaps going back to work would be a good first step. A while ago, Jasper “Jax” Jacks (Ingo Rademacher) offered Sam a position at Aurora Media to take Drew Cain’s (Billy Miller) position. Focusing on something other than Jason is exactly what Sam needs if she is going to have any kind of happiness.

Will Jason and Sam stay away from each other? Or will Sam end up back in prison and separated from her kids? Should Sam find something else to focus on, perhaps at Aurora Media? Only time will tell, so stay tuned to General Hospital airing weekdays on ABC. And don’t forget to check back here regularly for all your General Hospital news, information and spoilers!