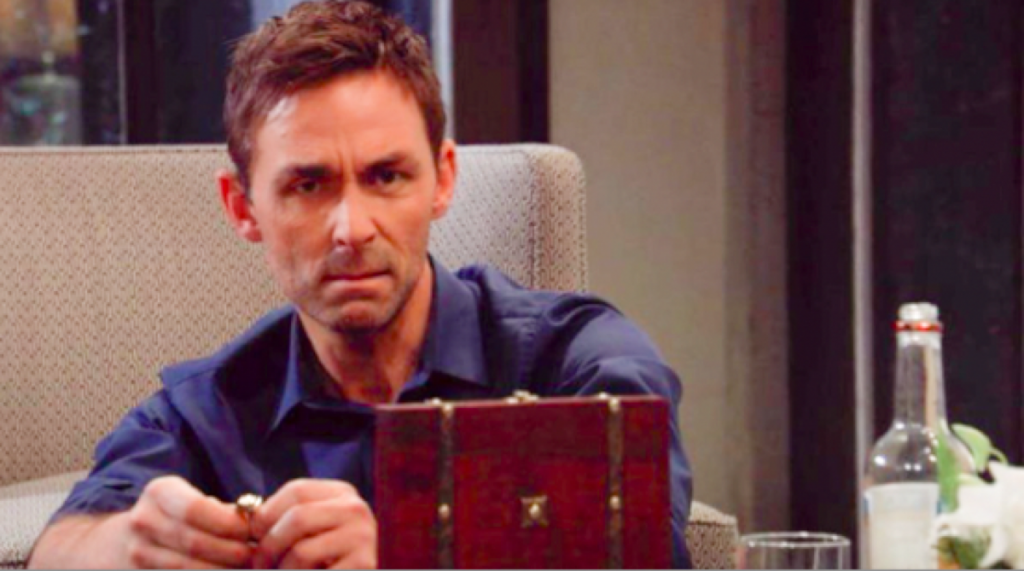 Welcome to your Friday, February 14th General Hospital (GH) recap! We begin our day at the Crimson offices where Nina Reeves (Cynthia Watros) brings Jasper Jax (Ingo Rademacher) some paperwork about the swimsuit photoshoot. He reminds her to “come to the fun side of the island.”

At the Metro Court Hotel in his room, Valentin Cassadine (James Patrick Stuart) pulls out his Cassadine crest ring, He says he has no use for it and asks someone we can’t see, how they did it? Suddenly Helena Cassadine (Constance Towers) appears and says there is no lie, it’s all the truth.

At the Metro Court restaurant, Alexis Davis (Nancy Lee Grahn) is having a meal with her daughter Sam McCall (Kelly Monaco). Sam wonders if she will address the elephant in the room Neil Byrne (Joe Flanigan) who is sitting nearby. He’s alone until a woman joins him at his table.

General Hospital Spoilers – Sasha is excited about her job with Deception

At Kelly’s Diner, Sasha Gilmore (Sofia Mattsson) updates her boyfriend Michael Corinthos (Chad Duell) on what’s coming up with Deception. Michael offers his services to set up a deal with Europe for the cosmetics. Does Michael wonder how much of a part Lucy is going to have in working with her?

Sasha thinks the European aspect of the company is an exciting part that she wants to help run. Nelle shows up and is annoyed they are all in the same place again.

At their apartment, Willow Tait (Katelynn Mcmullen) and Harrison Chase (Josh Swickard) drink wine and flirt. Suddenly there’s a loud banging at the door, Chase opens it and Nelle Benson (Chloe Lanier) dives into his arms and asks for help.

Chase jokes that she just assaulted him as Nelle says Brad and Lucas are thinking of leaving town and taking Wiley with them. Willow tells Nelle that its none of her business what they do with their lives and she says Wiley is her only connection to her dead husband Shiloh. Chase throws her out and says he will contact the police if she returns.

At Turning Woods, Brad Cooper (Parry Shen) checks on his husband Lucas Jones (Ryan Carnes) who says he’s feeling better every minute. Brad tells Lucas that he has a potential job opportunity. Lucas agrees that they should move to Portland which excites Brad.

Sam McCall (Kelly Monaco) shows up and he asks for her opinion on the move. Sam says that her son parole and maybe they need to reconsider he being his guardian.

GH Spoilers – Alexis Davis and her daughter Sam catch up

At the Metro Court, Alexis insists there was no real relationship with Neil, tho she wonders who he is sitting with. Its Liesl Obrecht (Kathleen Gati) who tells Neil she cannot wait till their next session to speak to him.

Obrecht lets Alexis know that there is nothing nefarious going on and laughs off the insinuation.

In his hotel room, Valentin Cassadine (James Patrick Stuart) says he does not remember a lot of his childhood and certainly not calling anybody mother. He realizes that he was her bastard son and she stuck him with the help.

Helena says Mikos was having affairs all over the island so it was easy for her to lie about his paternity. He says she hid the codicil in the portrait for Nikolas to eventually find but the fortune was always Spencers.

Helena says to congratulate her, Charlotte was created so that Luke Spencer is forever a part of her family line. She has succeeded and he should thank her – Valentin throws a glass and she disappears.

Jasper Jax (Ingo Rademacher) says he enjoyed their kiss and could have kept going, but did not want to take advantage of her. Nina asks Jax why he is interested in her and he says she’s a lot of fun, minus the baggage.

Nelle threatens Michael that he is going to lose Wiley forever. Lucas calls Willow and says he has something important to tell her. Jax and Nina make love.………flash to preview

General Hospital Spoilers: Can Finn and Ava Survive His Betrayal and Her Defense Of Peter?