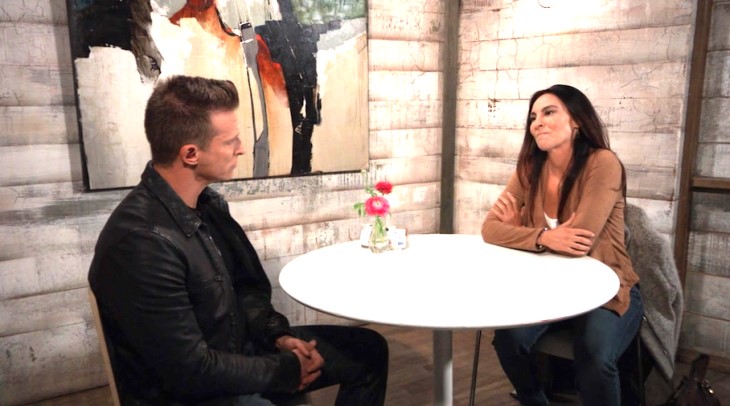 General Hospital (GH) spoilers tease that Harmony (Ingo Cadranel) is in too deep with Cyrus Renault (Jeff Kober) to get out of the situation alive. Cyrus doesn’t like loose ends, and as soon as Harmony’s usefulness ends, Cyrus won’t her around spilling her guts.

As viewers know, Cyrus has had Harmony act as his go-between with Jordan Ashford Brianna Nicole Henry), as he gives Jordan instructions if she wants TJ Ashford (Tajh Bellow) to stay alive.

As viewers know, Harmony was one of the prisoners released due to prison overcrowding. Somehow, Cyrus managed to have Harmony released early in exchange for her services . But at some point, she must have tried to end their business relationship, because Cyrus threatened to harm Willow Tait (Katelyn McMullen) for as long as Cyrus decides.

Harmony’s usefulness may be coming to an end sooner now that Jordan has told Sonny Corinthos (Maurice Bernard) and Jason Morgan (Steve Burton) Harmony has been compromised. Will he send one of his men after her, or will he kill wait until he’s released and take care of her himself. Either way, Harmony seems to be well aware that something will likely happen to her soon, Her last talk with Willow sounded like a final goodbye.

Willow definitely felt concerned for her mother and when Jason told her that Harmony was mixed up in something dangerous. She asked Jason to protect Harmony if he could, but even Jason knew that if Cyrus wants Harmony dead, there won’t is much he can do. If Harmony does, die, it will yet another in a long line of a tragedy that Willow has faced recently. The baby swap reveal is still very fresh, and Willow lost two children that day. To lose her mother too in such a senseless. (It will probably the catalyst for decision o go ahead and marry Michael Corinthos (Chad Duell_). She won’t likely want to continue to feel helpless if there is anything she can do to help Wiley Corinthos (Erik and Theo Olsen).

GH Spoilers – What Will Happen?

DO you think Cyrus will kill Harmony once he finds out Sonny knows about her? Will Willow reach her breaking point after losing so much. Or will she decide to do whatever she has to protect her loved ones while they are still living? Will tragedy lead wedding bells? Only time will tell. So stay tuned to General Hospital airs weekdays on ABC. And don’t forget to check back here regularly for all your General Hospital news, information, and spoilers!