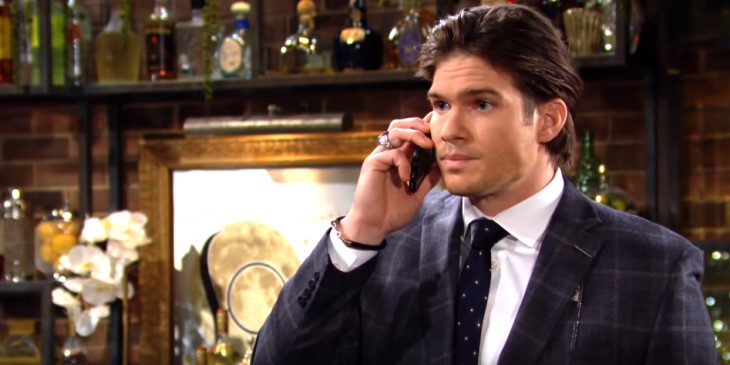 Theo Vanderway (Tyler Johnson) is intent on damaging Kyle Abbott’s (Michael Mealor) life on ‘The Young and the Restless’. That’s why the quixotic character Johnson plays is using a Jabot staffer in a meaningful effort to bring Kyle down.

The plan is to find information that can be used against Jabot’s current co-Chief Executive Officer. The effort appears to involve some form of public humiliation that forces Jack Abbott (Peter Bergman) to relieve his son of his duties.

The endgame Theo foresees has him potentially replacing his cousin as the co-CEO, which is a bit of a soapy stretch. While Dina Mergeron’s (Marla Adams) recently revealed grandson likes Jack, there’s no telling whether he’d try to push Bergman’s iconic character out of the family company after that assumed spot is attained.

The Young And The Restless Spoilers – New York Nights Detested

Kyle and Theo weren’t actually friends when they were running wild in New York. And that retro analysis is meant to address two levels.

As they and the viewers learned, both men were cousins, rather than friends when they were living freely in the Big Apple. Plus, the relationship they’ve developed into the spring of 2020 confirms that Theo developed a latent jealously at some point while he and Kyle knew each other years ago.

For his part, Kyle warned everyone that Theo would be trouble. The prediction was widely discounted, but it’s been proven fully true.

Summer Newman (Hunter King) is the only person who fully recognizes that Kyle was right about Theo. She had her own dealings with him, which included a romantic relationship that quickly went south.

Theo shared a belief with Summer, while they were together, that ‘Kola’ wasn’t going to last. Both people believed that Kyle and Lola Abbott (Sasha Calle) weren’t right for each other. That outlook initially appeared to purely represent selfish hopes that the married couple would fail.

Time has revealed that self-interest wasn’t the main force fueling ‘Tummer’s’ (Tyler and Summer) prediction. Instead, Theo and Summer’s combined analysis was based on instinct that’s been completely validated.

The Young and the Restless Spoilers: A Killer Twist Has Adam Newman Out For Revenge https://t.co/9uA0MGdmz0 pic.twitter.com/jKPAa6cIFt

Theo isn’t wrong about Kyle’s arrogance either. But this time, Theo’s bitterness is clouding his judgment and risking his own fate.

The risk-taking efforts Theo is pursuing could result in Kyle losing the plum spot his genetic connection to Jack enabled. But Theo is only working in a prominent position at Jabot because he’s family as well.

The longterm rub would seem likely to eventually cause Theo’s ruin, through his own hands. Where he, his cousin, and both ladies, who are linked to this storyline, are by that time should prove to be a good plot to watch.