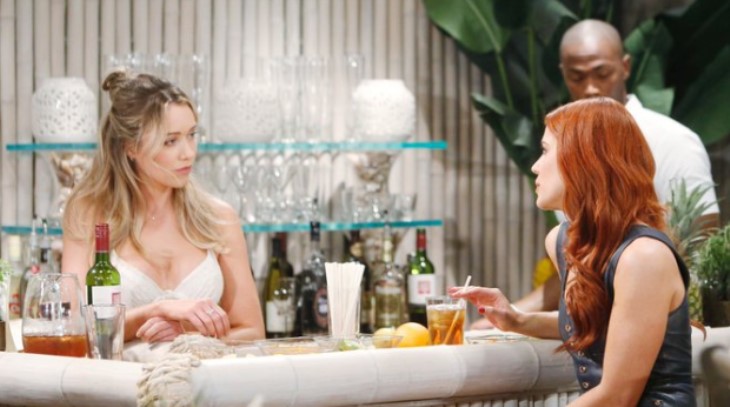 The Bold and the Beautiful spoilers reveal that Sally Spectra (Courtney Hope) is doing everything in her power to get back Wyatt Spencer (Darin Brooks). She wants to be sure that he ultimately chooses her over Flo Fulton (Katrina Bowden). After hearing an upsetting conversation between Wyatt and Flo, Sally arranges a “special delivery” to her romantic competition. What could it be and will it change things?

The Bold and the Beautiful Spoilers – Sally Spectra’s Sickness

B&B spoilers reveal that Sally isn’t sick at all. It’s just a horrifying scheme cooked up by the designer. Her goal is to show Wyatt just how good they are together, then they can have their happily ever after. As for her death in 30 days, she has a plan to explain her not going coffin shopping.

Her friend, Dr. Penny Escobar (Monica Ruiz) is helping her convince others that she is dying from some horrible, untreatable disease. When Sally finally gets what she wants, then she will receive a miracle cure.

At first, Flo was one of the first people to feel bad for Sally. In fact, she encouraged Wyatt to spend time with his former flame so her last days were the best ever. However, recent events have made Flo question what is really going on. She is starting to get suspicious and fans can expect her to start looking into things.

The Bold and the Beautiful Spoilers – Wyatt Spencer’s Private Conversation

The Bold and the Beautiful spoilers reveal that Wyatt and Flo will have a private conversation. While Flo is treading carefully considering she’s talking about a “dying” woman, she has concerns. She will probably bring up certain oddities that she’s noticed with Sally.

However, Wyatt and Flo have no idea that Sally is lurking nearby and is listening to everything that is being said. She decides that she must act fast to throw Flo off track.

It is teased that this week, Sally will be fuming after hearing what Flo said to Wyatt. She will then arrange a “special delivery” to Flo’s apartment. While we have no clue what it could be, might it be that neon blue walker that Sally is seen pushing around in sneak peek photos?

Or will it be something else? Perhaps Sally will arrange a flower delivery with a romantic note to be sent to Flo, only it’s addressed to Sally? That’s always a possibility. However, the antic doesn’t work as Flo continues to investigate and starts questioning Dr. Escobar.