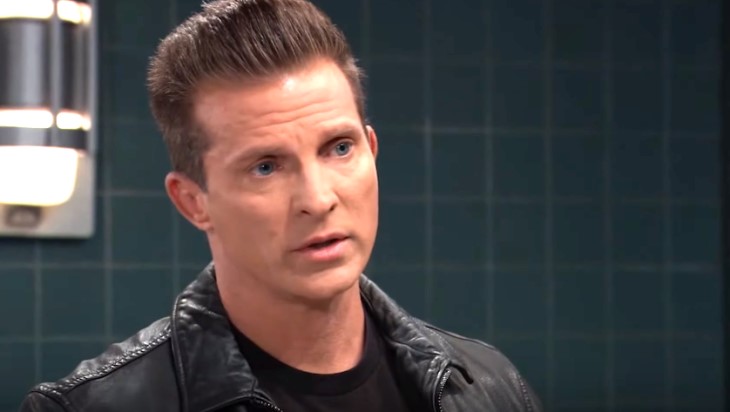 General Hospital (GH) spoilers revealed that Sam McCall (Kelly Monaco) recently met up with her ex-husband, Jason Morgan (Steve Burton) in clandestine fashion. GH viewers know that Sam keeps pushing the limits of her parole, and oops, she did it again!

First of all, who knew that Sam and Jason’s “usual spot” was an alley? Well, now GH fans know. With that said, GH viewers know that in recent episodes Sam confessed to Jason that her parole officer, Dolores Maloney (Andi Chapman) is looking for any reason to send her back to Pentonville Prison for good. When pressed, Sam admits that she was looking for a way around the terms of her parole. In fact, she was looking for some type of leverage that she could blackmail Maloney with.

Boy howdy did that ever backfire! When Jason asked her precisely what happened, Sam told him the story of how she’d recruited Damian Spinelli (Bradford Anderson) to help her spy on Maloney. Spinelli had discovered that Maloney was sleeping with a married city councilman, and even saw them going to town in the back of a car. However, then Spinelli was caught and Sam got caught by proxy.

Some GH viewers may have been surprised to hear Jason Morgan echo Sam’s mother, Alexis Davis (Nancy Lee Grahn). In the course of their short conversation, Jason let Sam know that he cares about her, but she needs to start adhering to the terms of her parole. Jason believes Sam shouldn’t play around with her future or with her ability to be with their children. Jason lets her know in no uncertain terms that it’s better for him and Sam to be apart for two years than for her to spend one more minute in prison.

Sam appeared to balk at this, but Jason pressed on. He insisted that outside of Pentonville, he could protect Sam and the kids. Inside of the prison, however, he could not … and inside Cyrus Renault (Jeff Kober) would be able to do what he wanted with her. In other words, if Sam doesn’t chill out and keep to the terms of her parole, Cyrus could have her killed as soon as she’s hauled back behind bars.
Jason tells her too, that Cyrus actually has the motive to do just that.

As many GH fans have complained, Sam doesn’t seem to be too level headed. Sam also doesn’t seem to think much about her kids. She’s a very selfish GH character. This can easily be seen by her reaction to Jason’s words. Instead of pausing and considering that nearly every person who cares about her has told her the same things, Sam still wants what she wants. Sam’s like a heart, apparently.

Still, GH viewers might see Sam come to her senses if she believes that Jason could leave her for good. For example, if Jason makes Sam believe that he’s horrified or disgusted (or both) by her evident selfishness and that he can’t believe she’d put their kids at risk the way she has, maybe some sense will finally get through to her.

Then again, because Sam is supremely self-centered, may be appealing to her own best self-interests is the only way to make her see the light. If Sam wants to see Jason again in a romantic capacity, ever, she’s got to exercise some self-control.