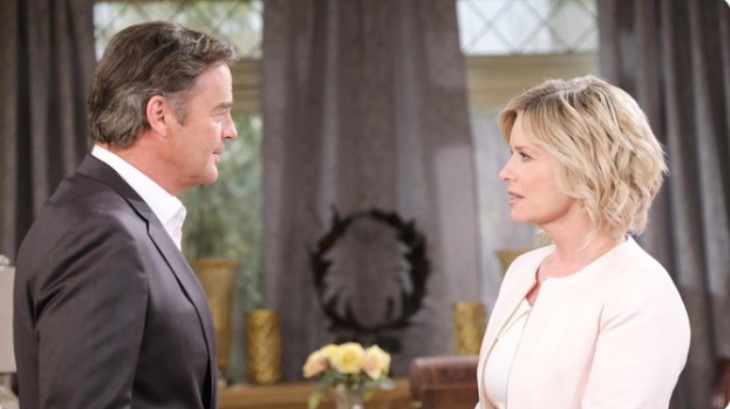 Days of Our Lives spoilers reveal that Justin Kiriakis (Wally Kurth) is becoming even more insecure. Ever since Steve Johnson (Stephen Nichols) returned, he has worried about losing Dr. Kayla Brady (Mary Beth Evans). This fear increases when the brain chip gets removed. Kayla keeps reassuring him over and over. Could she finally just give up on her current love interest?

DOOL spoilers reveal that ever since Steve came back, even as “Steve-ano,” Justin has worried about his relationship. He seems to be jealous and insecure, fearing he will lose Kayla. Well, that will just intensify now that Kayla is determined to get back the real Steve. Especially since she refuses to leave Steve’s side after the surgery.

A few months ago, Justin and Kayla decided to move in together. While Kayla was unpacking boxes, she came across a photo of her and Steve. She held it in her hands for a few moments, unsure of what to do with it. Although she nearly tossed it in the trash, she decided to hold onto it. This was one of the first clues of a future “Stayla” reunion.

Days of Our Lives spoilers reveal that Justin is becoming more jealous and insecure as the days go by. In the latest issue of Soap Opera Digest, Evans explained,

The fact that Kayla is “endlessly” reassuring Justin is a red flag. Relationships typically don’t survive if one partner is insecure and jealous. Now that Steve is coming back as himself and will soon remember his love with Kayla, it could create a complicated love triangle. Which man should she choose?

Days Of Our Lives Puzzle Challenge: Solve the Soap Star Who Has Been On DOOL Since A Child https://t.co/4qcZnIu73R pic.twitter.com/pixytjNJfo

Evans explains that it is a complex situation for Kayla and she doesn’t know what to do. However, “Stayla” fans are confident that Steve and Kayla will end up back together. Over their 30 years together, nothing has prevented them from reuniting, but this is a whole new scenario. We will just have to keep watching to see what Kayla does in the end.