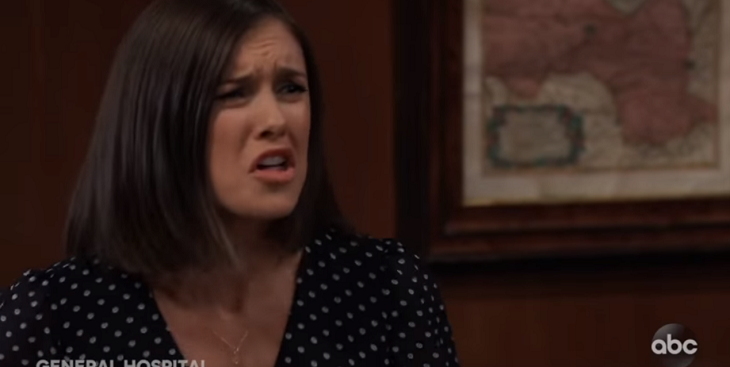 General Hospital spoilers tease that Willow Tait (Katelyn MacMullen) will let Nelle Benson (Chloe Lanier) know how she really feels about her, and she’ll give her a cold, wet, chill pill in an upcoming episode of GH!

Willow is definitely NOT happy that Nelle’s charges were dropped – especially the ones that affect Wiley Corinthos (Erik and Theodore Olson)! Nelle was charged with kidnapping, assault, and fraud for beating Willow up and kidnapping Wiley, and holding fictitious passports for the two of them, getting ready to fly overseas with the child.

And yet, every single charge was DROPPED, and now she has a sole custody suit started against Michael Corinthos (Chad Duell) besides! Nelle doesn’t even have a job – and she no longer has her rights to her ELQ shares either – she sold them to Valentin Cassadine (James Patrick Stuart) for the fake passports and identification documents! Willow, Michael, Michael’s girlfriend Sasha Gilmore (Sofia Mattsson) and Willow’s boyfriend Detective Harrison Chase (Josh Swickard) simply cannot figure out how in the world Nelle’s charges were all dropped – District Attorney Robert Scorpio (Tristan Rogers) cannot either, although he, as well as Chase and the others highly suspect the judge is corrupt and being paid off, although they are not sure yet by whom! Chase tells Michael the two of them need to have a talk about Janelle!

None of this makes sense, any sense at all! Plus, now Michael will have to cough up a wife to show stability to family court, because two-parent homes are favored over one-parent homes, although the mother in the case is frequently favored even if she is not married; what’s next? Will Michael have to move out of the Quartermaine mansion and buy his own house as well?

Willow encounters Nelle at the bar in Charlie’s Pub. Nelle is being her usual obnoxious self, bragging about getting custody of Wiley! Julian Jerome (William DeVry) is tired of her lying mouth as well, with her being such a big part of potential trouble for him, should he ever be discovered to have known that Wiley Cooper-Jones (Erik and Theodore Olson) was really Jonah Corinthos, (Erik and Theodore Olson) now being called Wiley Corinthos, because he is old enough to know his name! He leans over the bar, looks her square in the eye, and tells her “You know – by the time Wiley’s grown, he won’t even know you exist!” Nelle doesn’t take that so well and starts acting up and gets so loud that Willow’s attention is drawn to her, Willow having been at Charlie’s Pub meeting with Sasha Gilmore (Sofia Mattsson) and talking about men, marriage and weddings.

Nelle doesn’t fool Julian one little bit and she doesn’t scare him, either, and before long Willow has heard enough and seen enough – and she decides to give Nelle a piece of her mind! She is tired of hearing Nelle’s mouth, knowing that she is nothing but a lying liar who lies, and she also knows Nelle no more loves her son than she knows how to tell the truth! This is not a mother grieving a baby who so much of his life she has missed, this is a con artist using her son as a pawn and possibly even as a shield! Willow walks over to the bar, and decides to give Nelle a cold, wet, chill pill as she grabs a drink from the bar and throws it in her face, completely soaking her! How do you like the vodka shampoo, Nelle? Burns your eyes, doesn’t it!