General Hospital Spoilers: How Much Further Will Valentin Go To Help Nelle? 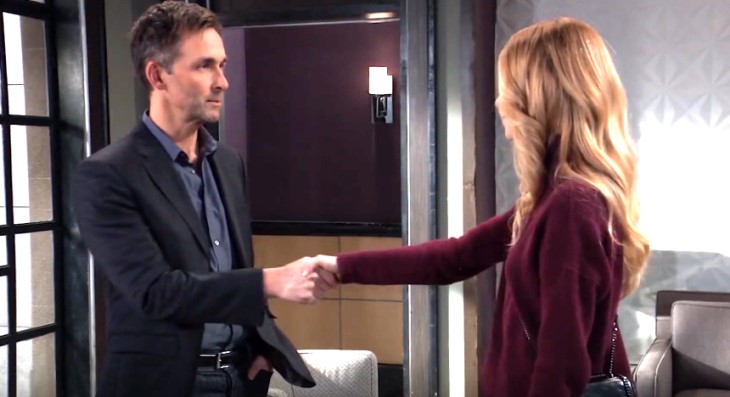 General Hospital (GH) spoilers suggest that Nelle Benson (Chloe Lanier) may overplay her hand. As GH viewers know, the evil Valentin Cassadine (James Patrick Stuart) provided Nelle with much aid, comfort, and cash in exchange for her shares in ELQ. The question is whether Valentin will continue helping Nelle now that he no longer needs her.

As GH fans know by now, Valentin is on a campaign to increase his status and prestige ever since he learned to his horror that he isn’t a real Cassadine. As part of that campaign to gain power in Port Charles, Valentin has begun buying up controlling shares in numerous companies in a variety of industries. For example, Valentin recently acted as an angel investor in a deal that saw him become a silent partner in Lucy Coe’s (Lynn Herring) company, Deception Cosmetics.

GH viewers have also watched Valentin take an interest in the Quartermaine family’s firm, ELQ. Now, as part of Valentin’s devious plan to gain a controlling share there, he looked for the weakest link. Valentin found it in the person of Nelle Benson.

Of course, Valentin quickly saw what Nelle’s needs were and then offered her an arrangement that she simply couldn’t refuse. The evil Cassadine offered Nelle plenty of cash but then sweetened the pot by providing her with forged passports and birth certificates. Then Valentin went above and beyond the call of duty by ensuring those same documents went missing from the PCPD’s evidence locker when Nelle was arrested. Now, Nelle is free to carry on her reign of psychotic terror against the Corinthos family because of Valentin’s interventions on her behalf.

One might think that would be enough to satisfy Nelle. However, anyone who’s watched even one episode knows that Nelle is a dark GH character with a never-ending hole in her heart. Nelle always wants more.

Some GH viewers may recall that after Nelle Benson’s amazing acquittal during her arraignment at court, she called Valentin. During the call, she actually hit on Valentin. However, Valentin didn’t take Nelle’s offer and hung up on her. It appeared many GH fans felt that Valentin had what he needed from Nelle. From Valentin’s point of view, he felt he’d paid in full. Now, Nelle was on her own. (He said as much to Nelle on the phone when he urged her to enjoy her freedom while she could.)

Some believe that after the incident that occurred not long ago at General Hospital where Carly Corinthos (Laura Wright) and others sidelined Nelle, the sociopathic Nelle called Valentin once again for the help. If Valentin was indeed the person Nelle was speaking to on the phone, it’s possible that Nelle could be up a creek without a paddle.

After all, Valentin is about to make his move to take full control of ELQ. Why should he bother himself with Nelle’s petty interpersonal politics? The truth is, Valentin may have gone as far as he wishes to with Nell.

In fact, Valentin Cassadine may be saying to himself, “This far, and no farther.”