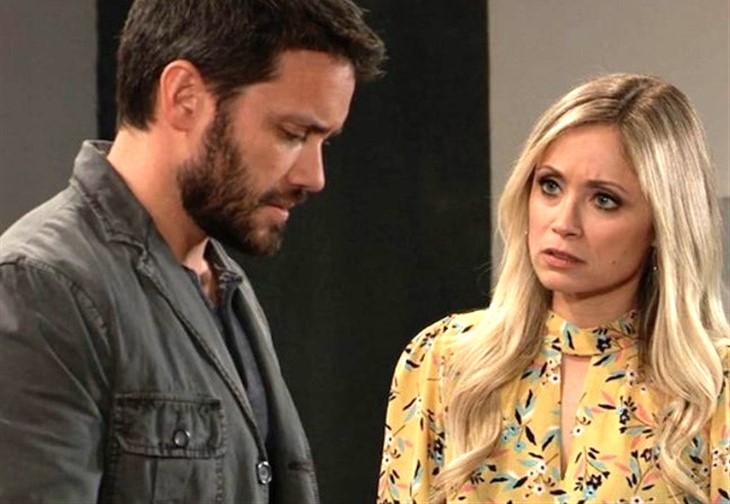 ABC General Hospital spoilers tease that Lulu Spencer (Emme Rylan) is torn – how will she deal with her feelings for Dante Falconeri (Dominic Zamprogna)? She and Dustin Phillips (Mark Lawson) are serious – they’ve just moved in together!

Viewers will recall that Lulu not only wasn’t expecting Dante at the door of her house, but she also wasn’t expecting him to not have left the door of her heart either! All those forgotten – or buried – feelings came rushing to the surface when she saw Dante was home. It was very obvious. She had just come from the bedroom where she and Dustin had celebrated the step of them moving in together by making love, and here her ex-husband has shown up! Dustin also came in to see what was going on, buttoning his shirt up so it was pretty obvious to Dante what he had walked in on.

He even fantasized about killing “Desmond” or “Darius” or whatever the dude’s name is prior to shaking his hand! Then he excused himself to wash up like he had to wash Dustin off his hand! It is just as obvious Dante still has feelings for Lulu too! Dustin left – and the two ex-spouses talked things over. Lulu very obviously revealed she still loves Dante when she told him she would have waited if she’d known he would have been back in a year and a half!

Still, Lulu didn’t take long to jump into Dustin’s arms after Dante sent those divorce papers – even though she did take a while to sign them. It was a very hard transition time for Lulu. She even felt like she had to apologize to Sonny Corinthos (Maurice Benard) for going through with the divorce. Her former mother-in-law, Olivia Falconeri Quartermaine (Lisa LoCicero) was another story, however!

GH Spoilers – Dante Falconeri Had Told Her To Move On

Dante had told her to move on – and she did, and she reminded him of that. That reminder is a red flag that Lulu feels guilty for moving on so soon! What is she going to do? Both men are clear that she’s moved on, and Dustin is in her life and they are serious about one another. They wouldn’t have moved in together if they weren’t. But Lulu just can’t deny her feelings for Dante either!

They are a difficult thing to hide and to keep under the surface. She worries that Dustin might be able to tell she still has feelings for her ex-husband, and she doesn’t know how to get rid of them! She didn’t even realize they were there until Dante showed up at the door!

Worse yet, she knows that Olivia will be after her to dump Dustin and reconcile with Dante once she finds out he’s back. Dante mentioned he had to find a place to stay – but he’s not quite ready to deal with his mom himself! He can’t stay there – Dustin is there! He’ll probably go to Sonny’s, or Sonny might put him up in one of his safe houses for a while. As for Lulu, she’s going to have to deal with her conflicted emotions. She will need to decide whether she wants to stay with Dustin or go back with Dante because she won’t want to hurt either one; and she doesn’t want to hurt anymore either!