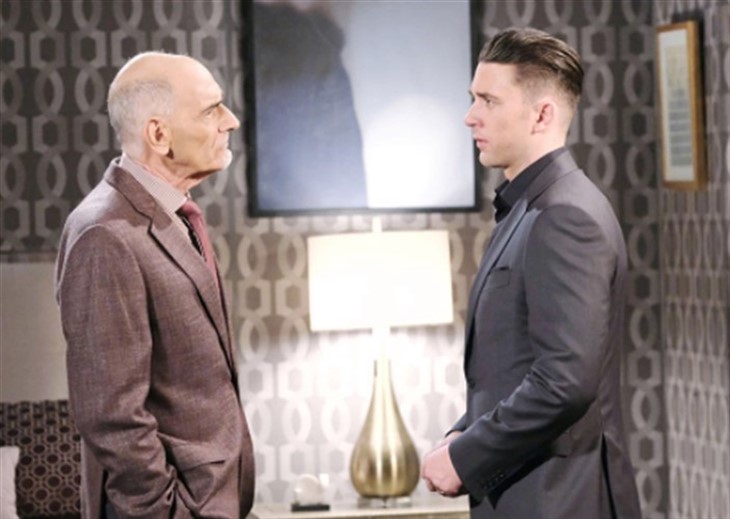 NBC Days of Our Lives (DOOL) spoilers for next week of October 19 reveal that Chad DiMera (Billy Flynn) will find his life in danger. Dr. Wilhem Rolf (William Utay) suddenly shows up at the DiMera mansion. The sinister scientist points a loaded gun at Chad’s face with the intent of killing him. Can Chad somehow get out of this predicament or will see the death of another DiMera family member?

DOOL spoilers reveal that Gwen Rizczeck (Emily O’Brien) isn’t new to Salem at all. She’s even quite familiar with the DiMera family. She’s had Abigail DiMera (Marci Miller) in her sights for a long time and even drugged her. Gwen is continuing her scheme and we recently discovered that her secret partner is none other than Dr. Rolf.

During the week of October 19, Dr. Rolf will either be released from jail or finds a way to escape. He heads over to the DiMera mansion and confronts Chad. The mad scientist threatens to kill the heir and has a loaded gun. He points it right at Chad’s face, according to a photo published in the new issue of Soap Opera Digest’s NBC soap opera spoilers.

Days Of Our Lives Spoilers – Will Chad DiMera Die?

Days of Our Lives spoilers reveal that there haven’t been any rumors or news of actor Billy Flynn leaving the NBC soap opera. So, we have to assume that Chad will somehow survive this dangerous situation.

There are a few different things that could happen. It is teased that Gwen is forced to make a choice. Dr. Rolf must make her pick which side she is really on. If she changes her mind about getting revenge, then she could save Chad.

There is also the possibility that Jake Lambert (Brandon Barash) will come upon the tense situation and prevent his brother’s death. If that happens, then it could pave a way for the siblings to get along. There is also the chance that someone else will come in and interrupt, like Abigail. It was previously confirmed that Utay is exiting the soap, so that means Dr. Rolf’s story will end… at least for now.

Who do you think ends up saving Chad DiMera’s life? Will Dr. Wilhelm Rolf be killed off, go to prison or disappear without a trace?