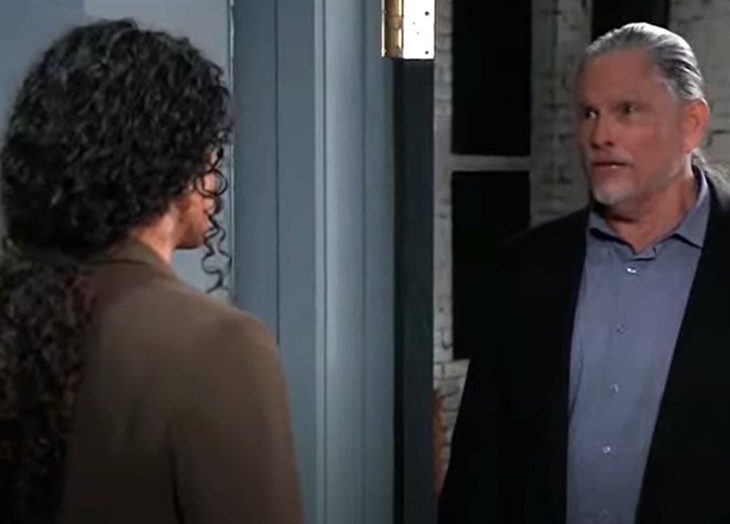 General Hospital spoilers indicate that Cyrus Renault (Jeff Kober) will want a file from Jordan Ashford (Briana Nicole Henry) but who’s file could he want and why?

Perhaps Cyrus wants to hire Liesl to work and G.H. and is trying to find a way to clear her name so he can accomplish that. It is highly possible that he doesn’t know that she is working with the WSB doctor to take down Peter August (Wes Ramsey). After all, Liesl is supposed to be in the Hague, not giving orders to Dante Falconeri (Dominic Zamprogna).

General Hospital spoilers tease Nelle Benson Jerome (Chloe Lanier) recently turned up dead, or so they say. However, people rarely die in Port Charles, especially villains. Perhaps Cyrus is behind her supposed death and wants the file to make sure no one has figured out that their dead body isn’t Nelle. Could the body belong to the good samaritan that helped Nelle find her way to the cabin? Maybe Nelle is secretly working with Cyrus against Sonny Corinthos (Maurice Benard). After all, Cyrus wants to take down Sonny and Nelle hates him and would be willing to help for a price.

General Hospital’s Shiloh Archer (Coby Ryan McLaughlin) is liable to pop back on the scene any minute. Shiloh’s “widow” is supposedly dead. Shiloh has also gotten by with every evil thing he has ever tried. No one could do anything with Shiloh until Sam McCall (Kelly Monaco) shot him to save Jason Morgan (Steve Burton). Is Cyrus working with Shiloh? Did Cyrus help to face Shiloh’s death? Is Cyrus the reason that Shiloh could turn up alive at any time? Could Cyrus need Shiloh’s records to get rid of any charges Shiloh may still have against him if he turns up alive?

General Hospital’s Cyrus could want the information on T.J.’s kidnapping as well. Jordan knows that Cyrus was behind T.J.s kidnapping and assault. However, Jordan can’t use this information because she has no concrete evidence. Does Cyrus suspect that Jordan is working against him trying to take him down?

General Hospital’s Marcus Taggert (Real Andrews) got the blame for Cyrus’ arrest by the DEA. Could Cyrus suspect that Taggart is alive? Cyrus sees Taggert as the ultimate enemy. Does Cyrus’ simply want to make sure that Taggert is dead?

There are several files that Cyrus could want to get his hands on, some not mentioned here. However, these are some of the most likely ones that he would be interested in. Who files do you think Cyrus wants and why?