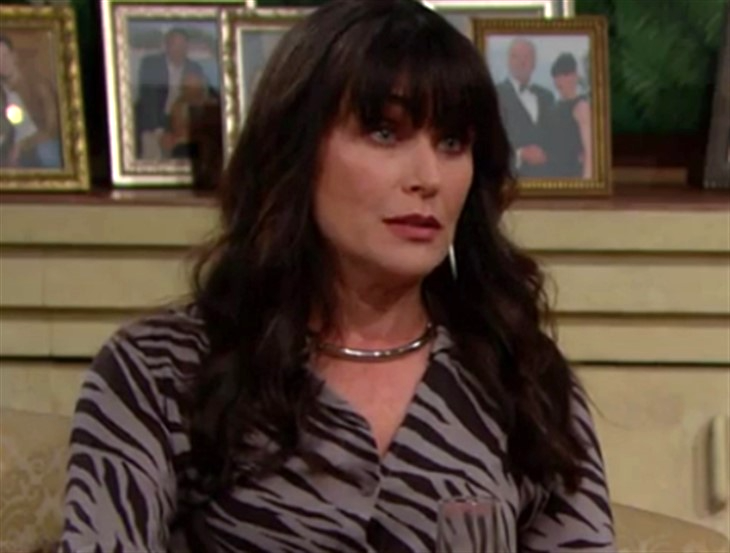 The Bold and the Beautiful spoilers reveal that Quinn Forrester (Rena Sofer) will lose her marriage when her scheme is exposed. Even though Katie Logan (Heather Tom) told Ridge Forrester (Thorsten Kaye) about it, Shauna Fulton (Denise Fulton) ends up confessing. Will Quinn target Flo Fulton (Katrina Bowden) so Shauna loses who she loves the most, too?

B&B spoilers reveal that Eric Forrester has forgiven his wife countless times for her meddling, interference, and schemes. However, this time will be different. At least, that is what actor John McCook teased to Soap Opera Digest. Of course, knowing Quinn, she won’t take this as a learning lesson and admit it’s her own fault. She will want someone else to blame.

The person that Quinn will probably blame will be Shauna. She was supposed to be her best friend, which means doing everything that Quinn says. All those conversations where Shauna told her BFF that she wanted to tell Ridge the truth should have been a sign. But instead of listening to Shauna and letting her do what her gut was saying, Quinn kept telling her to just keep quiet.

The Bold And The Beautiful Spoilers – Shauna Fulton Must Lose Someone Too?

The Bold and the Beautiful spoilers reveal that when Quinn loses Eric, she is going to want Shauna to lose someone too. Now, Shauna really doesn’t have anything. She doesn’t have a lot of money, doesn’t have a job (as far as we know), doesn’t have a house of her own, and has no man. The only thing that Shauna has is her daughter, who is the most important person in her life.

Even though Quinn watched Flo grow up and was like a second mother to her, she is a vengeful woman. In the grand scheme of things, she doesn’t care who gets hurt, as long as she accomplishes her goal. So, it’s very possible that Quinn will either turn Flo against her mother or do something to destroy Flo’s happiness.

Could she end up widening the rift between Wyatt and Flo? Or would she do something much worse to Flo in order to watch Shauna suffer? We will have to keep watching the CBS soap opera to see what happens.

’90 Day Fiance – The Other Way’ Spoilers: Three Ways That Jenny And Sumit Can Reach Their Goal