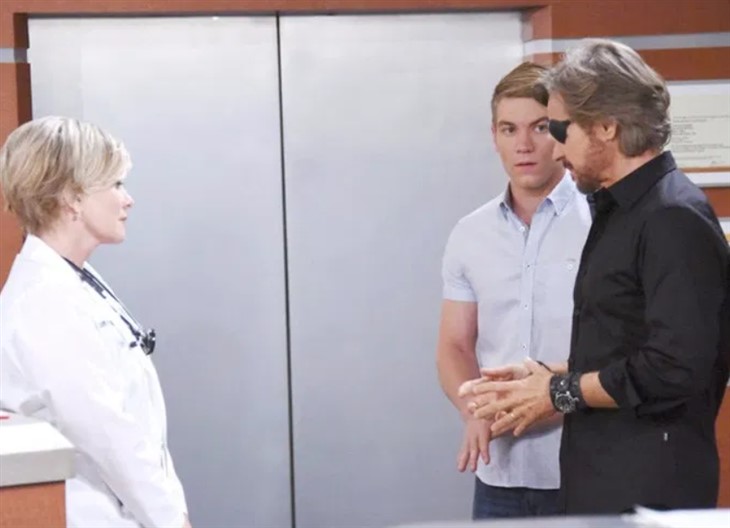 NBC Days of Our Lives spoilers tease that there is one sure way to tell if Tripp Dalton (Lucas Adams) is telling the truth about not having even slept with Allie Horton (Lindsay Arnold). That is to take a paternity test to see if his DNA matches baby Henry Horton’s (Jayna and Kinsley Fox). If it doesn’t, he didn’t sleep with Allie and stands no chance of being her rapist!

Days Of Our Lives Spoilers -Tripp Dalton’s Defensiveness Is Not Serving Him Well!

Viewers will recall that Tripp has become more and more defensive since he went to the police station. Detective Lani Price Grant (Sal Stowers) had come to Nicole Walker Brady’s (Arianne Zucker) apartment. She interviewed Allie there so she would be more comfortable. She just had recalled the details of the night Henry would have been conceived. Seeing Tripp obviously triggered something in her, and Nicole had coaxed out the rest.

There is some question as to whether she was just blackout drunk, or had been given a date rape drug. The rapist could have followed her and Tripp home and she may have opened the door to him after Tripp left. Remember, there was someone else in Salem who regained memories after being blackout drunk not that long ago. That was Maggie Kiriakis (Suzanne Rogers) who remembered that she wasn’t the one who ran Adrienne Kiriakis (Judi Evans) and her daughter Sarah Brady (Linsey Godfrey) off the road!

Maggie’s memories didn’t come back all muddled like Allie’s seem to have! However, when Tripp found out Allie had accused him of rape, he suddenly became very defensive! He went to the Salem Police Department to tell his side of the story as Lani requested. But when Justin Kiriakis (Wally Kurth) showed up, after being retained by Steve Johnson (Stephen Nichols) Tripp became defensive and ran out! That defensiveness is not good – it could be taken as a sign of guilt!

It will likely be Justin who will request a paternity test. Even if the case is not able to be prosecuted in Salem due to the offense having occurred overseas, a paternity test needs to be done. There was no rape kit, and a victim who didn’t remember fully what happened until approximately a year later. There is not very much forensically that can be done as far as looking for evidence.

However, a paternity test will settle some questions. If Tripp is not a match, then both he and Allie will be relieved. Tripp will be proven innocent of the rape, and Allie will realize her traumatized mind filled in the memory blanks incorrectly. She will likely apologize to Tripp. Little Henry’s DNA will be on file for further investigations into the rape.

Days Of Our Lives #DOOL Spoilers: Tripp’s Terrifying Rage Unleashed, Has He Fooled Us All?https://t.co/WjMII2xElj

Should he develop any type of genetic disorder in the future, having his DNA profile on file will help medically as well. Even if he doesn’t, it could still help in solving the crime if the DNA is traced by a forensic genealogist! Years-old cold cases have been solved in real life by that method, most notably the identity of the “Golden State Killer”!