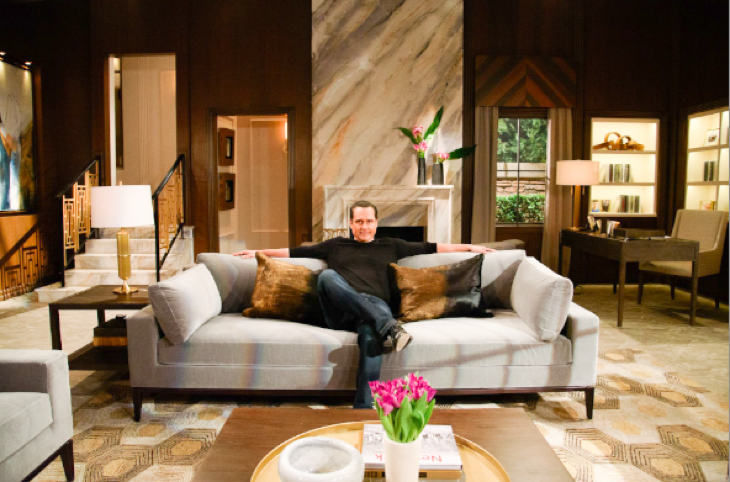 General Hospital fans got a surprise when Sonny Corinthos (Maurice Benard) walked into his house to reveal a changed entrance and living room. Were fans any more surprised than Maurice seeing it for the first time?

General Hospital posted a video of the popular star’s reaction to his new living room to show his surprise. Of course, but Laura Wright who plays Sonny’s wife Carly Corinthos and Chad Duell, Michael Corinthos portrayer had to be involved to make it a family affair. Executive producer, Frank Valentini is shown calling Maurice and Laura to a wall screen and asking if they want to see Sonny’s new living room.

The wall is moved to reveal an updated and much lighter room compared to Sonny’s older one. Sonny’s living room had remained unchanged for several years. This was actually a strange occurrence for fans who were used to Carly redecorating every time Sonny found a new woman where they were separated. Of course, Michael has to walk down the stairs from the newly renovated living room to give his approval. Both Maurice and Laura tease Chad saying “What’s he doing here?” and “Michael doesn’t live here anymore.”

General Hospital’s Maurice always pays attention to fans. The green moss in Sonny’s kitchen has been a huge topic of social media discussion since it appeared with this renovated kitchen. The new living room is designed with the same color scheme as the kitchen and Maurice quickly pointed this out saying, “it’s like the kitchen, only without the green moss.” Laura was quick to chime in replying that the kitchen and the living match looking like they belong in the same house. Of course, there was some teasing about the moss moving its way into the living room. No offense Maurice, but I think fans are over the moss already. Sonny’s kitchen should have its own herb garden.

General Hospital Spoilers: Alexis Confessed to Perjuring Herself & Falling Off the Wagon – Will She Lose Her Law License? https://t.co/jyFjGU0FCL pic.twitter.com/jflHjtOrMA

On the General Hospital screen, Sonny arrived home from a night at Turning Woods with his father Mike Corbin (Max Gail) and looked as if this was the first time he was seeing the living room himself. Carly did get credit for the redecoration, and Sonny praised her choices. With this gorgeous new living room, perhaps Sonny can be seen having conversations outside the kitchen with Sonny and Carly. Perhaps the moss can be out of sight and out of mind.

With both Sonny’s kitchen and living room being redone this year, fans have to wonder if more changes to the Corinthos home are coming. It might be interesting to see what or who’s house changes next.