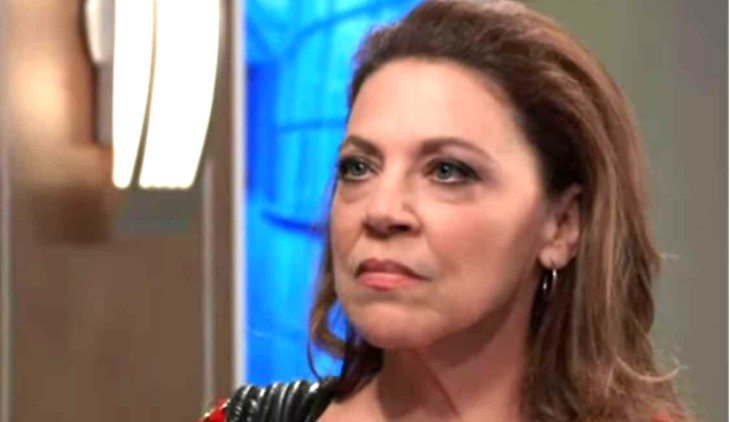 General Hospital (GH) Spoilers hint that Liesl Obrecht (Kathleen Gati) may come back with a vengeance, and this could mean the downfall of Peter August (Wes Ramsey). Peter has framed Obrecht for a crime that he committed. However, things may turn back around on him as Obrecht is getting ready for trial but is willing to fight to prove her innocence.

This may be a hint that she will be able to be her charges and come back to prove who really kill Drew Cain (Billy Miller) and who tried to kill Franco Baldwin (Roger Howarth). Could Peter be taken down by Obrecht?

As viewers know, Obrecht has recently been accused of killing Drew and trying to kill Franco. It seemed that she would be able to make a deal with Robert Scorpio (Tristan Rogers); however, recently, he decided to take their deal off of the table as she would be going to trial. This was upsetting to Obrecht, who thought that she had gained an ally.

Robert is the only one who believes that she is innocent. In a way, Robert’s hands are tied, and it does seem like he felt bad for her before she left with him, even promising to look after Maxie and James for her. However, Obrecht’s future is in her own hands, meaning that she might be the only one who can get her out of her current situation.

Obrecht shocks Robert when she says that he can watch them at least until she comes back. Robert cannot believe that she has the mindset that she can beat the charges. However, as viewers know, Obrecht has spent time getting away with things that she has done. So, it would not be a surprise for her to beat the charges and prove her innocence. However, when she does come back, she will want Peter to pay for what he has done.

Viewers may see Obrecht come back having beaten her charges and see her take down Peter once and for all. What do you think? Will Obrecht be able to take down Peter? We’ll give you updates as GH news comes in. Stick with the ABC soap, and don’t forget to check Soap Opera Spy often for the latest General Hospital spoilers, updates, and news.

The Young and the Restless Spoilers: Nick & Phyllis Team Up To Take Down Adam