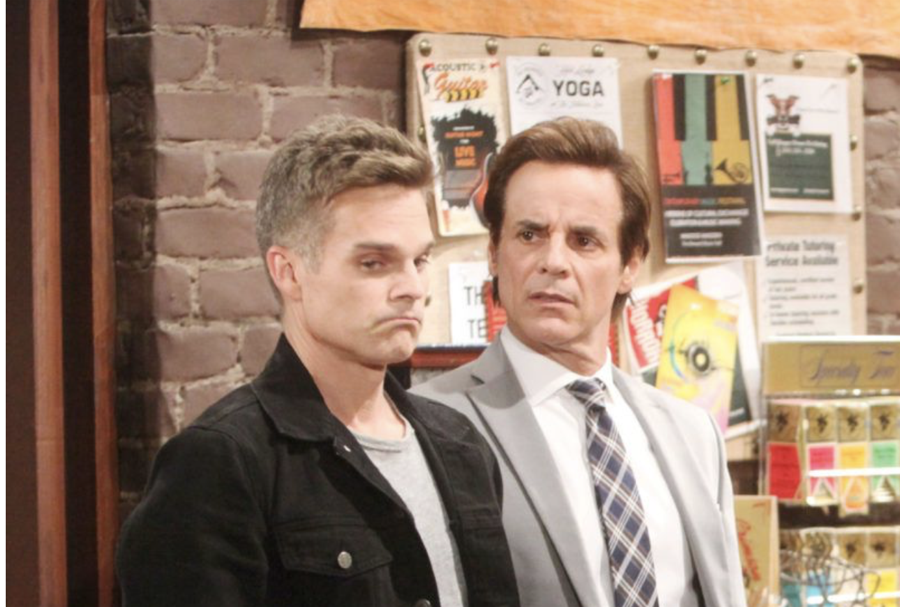 Gloria never shows up without an ulterior motive, and usually, because she’s in some kind of trouble, or maybe just to make some trouble of her own! The last time she was in town was in 2017 when she tried to sabotage Lauren Fenmore Baldwin’s (Tracey E. Bregman) company, “Fenmore’s” and tried to draw Jack Abbott (Peter Bergman) in. At first, he was tempted to help her with a hostile takeover, ostensibly to bail Lauren out, but then changed his mind. He is close friends with Lauren and couldn’t do that to her. Gloria then asked him out for drinks, got him drunk, and they had sex.

Then she blackmailed Jack with the sex to get a job at Jabot Cosmetics! Kevin knows his mother all too well and knows she wouldn’t come rushing to town from wherever she’s been recently just to meet the baby! Kevin tries to coax whatever Gloria is obviously hiding out of her.

Kevin secretly calls Michael to come over while Gloria plays with Miles. He continues to prod her as to what she’s been up to since she was in Genoa City the last time, while Michael is on his way. But Kevin comes off wrong and annoys her. She feels like she is being interrogated and becomes indignant. Nevertheless, Kevin and Michael are determined to find out her real reason for coming.

Michael is now the District Attorney, and Kevin works as an IT guy at the Genoa City Police Department so they need to keep their noses clean. Their mother, depending on what her ulterior motives are, could ruin things for both of them! They certainly do not want a repeat performance of what happened when she was last in town, especially considering how she sabotaged Lauren! Considering that Gloria was also once married to the late John Abbott (Jerry Douglas) and Dina Mergeron (Marla Adams) just died, they don’t want her stirring up any trouble for the Abbotts either.

Lauren just helped Jack retrieve a family heirloom that had come into her father’s possession so that Dina could die peacefully. Gloria could have even been the one who stole “The Teardrop Of Love” to begin with, and Michael and Kevin agree her timing is suspect. However, Gloria soon becomes irate with all the questions and storms out the door!