General Hospital Spoilers: Cyrus Renault And Martin Grey: How Could They Be Connected? 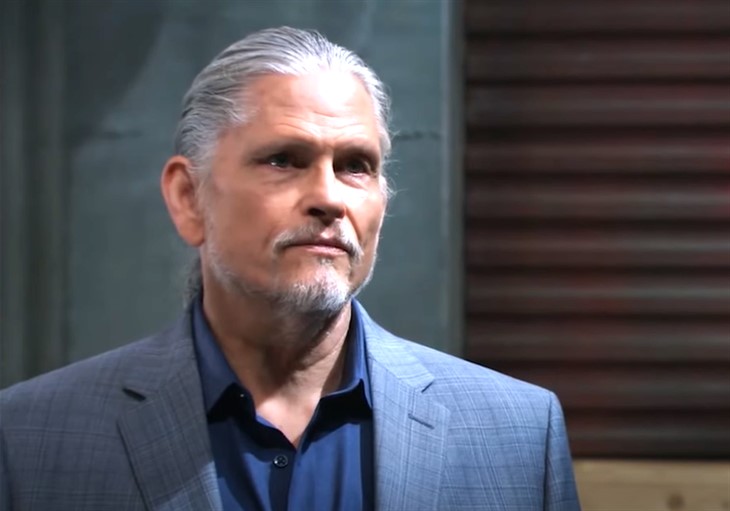 General Hospital spoilers tease that in Port Charles, NY Cyrus Renault (Jeff Kober) and Martin Grey (Michael E. Knight) have a connection. It was revealed in a recent episode of GH – but how might they be connected?

It was obvious that Cyrus and Martin have known each other for a long time. When it was revealed on General Hospital that the two men knew each other, Cyrus didn’t really want to talk. They were in the area of the Nurses’ Station at GH, and Cyrus was likely still stinging from the wallop that Laura Collins (Genie Francis) delivered. Martin and Cyrus went down a hallway, where Cyrus didn’t appreciate Martin butting in. Martin asked him had he ever known him to wait to be called. Martin likely overheard Laura shouting at Cyrus that she wasn’t going to stop until he was taken down!

The two men have had dealings in the past, and that may indicate the long, long ago past. It of course is possible that Martin and Cyrus know each other through business. Martin could have represented Cyrus in a long ago case, although it sounded like he may have represented him in many cases. However, there does appear to be another connection! When Curtis and Jordan Ashford (Donnell Turner, Briana Nicole Henry) were on the plane on their way back from Mexico, Jordan looked at the intel she had downloaded.

They had traced some of the medical equipment found in the house on Wilson Street in Astoria, Oregon to a manufacturing plant in Mexico. While Curtis went on a tour of the plant along with the secretary, Jordan stuck a flash drive in the front office computer. As they discussed what was on the drive, a patient with the last name Grey came up along with an account in Cyrus’ name!

GH Spoilers – Who Is The Patient Named Grey?

Of course, just because Martin’s name is spelled “Grey” doesn’t mean the patient’s name is. It could be “Gray”. It could also be an alias for the patient’s name. If Cyrus was protecting the patient he was hiding in the house on Wilson Street, it doesn’t seem like his or her real name would be used. However, his real name was used although he too may be going under an alias. Martin and Cyrus do not really look as though they could be brothers, although other General Hospital spoilers teased that Cassandra Pierce (Jessica Tuck) could be the patient and Cyrus could be her brother. That theory could still work – even though Valentin Cassadine (James Patrick Stuart) knows Martin, he doesn’t know Cyrus, and Cyrus doesn’t know him.

Cassandra could be the link between Martin and Valentin, and it would make sense for someone like Cassandra’s medical records to be under an alias and the name “Grey” could be a coincidence or not. General Hospital viewers will recall that Cassandra had many aliases! It is also possible that Martin was married to Cassandra at one time and Cyrus, and he were brothers-in-law. Martin could still have been Cyrus’ attorney for some years with that family connection. You have to agree that Martin certainly does seem to have a proclivity for representing criminals in court!

So what is the connection? Who is the patient? Is it Martin’s wife and Cyrus’ sister and is it Cassandra or someone else? Stay tuned to GH, and keep checking General Hospital spoilers frequently for all the latest news, updates and developments!