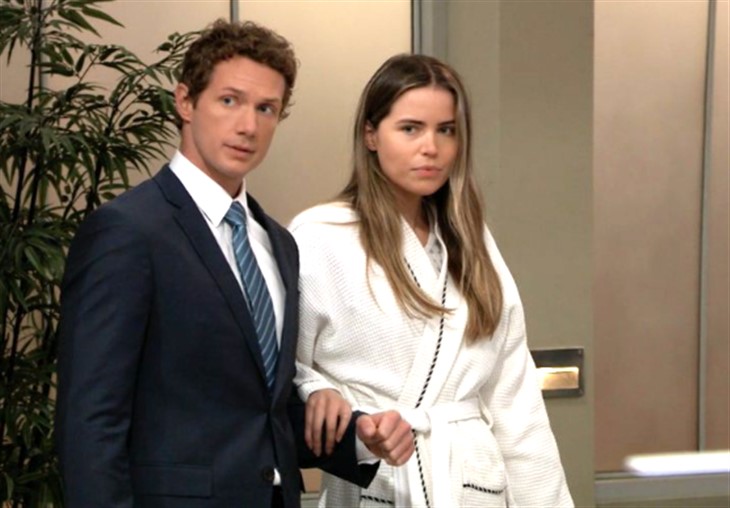 ABC General Hospital spoilers reveal that in Port Charles, NY two people know exactly what happened to Sasha Gilmore (Sofia Mattsson) the night she OD’d and had a heart attack in Cyrus Renault’s (Jeff Kober) ritzy man cave. When Cyrus poured out a mountain of coke in front of her, her eyes got bigger than a kid seeing Santa underneath the tree. Too bad this Santa was testing a new drug recipe on her, one that wasn’t ready for prime time.

As she was on the floor seizing, Cyrus told his lackey Brando Corbin (Johnny Wactor) to solve the problem. Brando did as he was told and scooped the damsel up and took her to General Hospital. Later Cyrus made it a point to say that when he said do something he didn’t mean save her!

Too late, Sasha survived, and she knows that: 1. Cyrus is a drug dealer and 2., he gave her a near fatal dose of funky junk. In other words she has a lot of dirt on him. But he is powerful beyond belief and explosive show spoilers reveal she will be under his thumb not the other way around, following their tragic encounter.

What will Cyrus make Sasha do in exchange for allowing her to live with all that she knows about him? There are three jaw-dropping nightmare scenarios Sasha could find herself in.

Someone has to run Cyrus’ drugs through town. Sasha is the perfect person to do so and not raise red flags: she has a distinguished job and associates with VIPS. No one would suspect her as toting a million dollars of heroin in her designer handbag.

Sasha’s access to the upper echelons of society gives her broad access to areas Cyrus is not welcome. She could be told to reunite with Michael Quartermaine so that Cyrus gets an inside track to Sonny Corinthos’ business dealings. Or she could be forced to launder money through Deception on the sly.

Brando is Cyrus’s number two guy but Cyrus has to suspect he could still be loyal to Sonny. Cyrus could demand that Sasha get involved with him and report back what she sees. Adding intrigue to danger, it looks like Sasha and Brando will be paired together, further conflicting the brunette beauty.