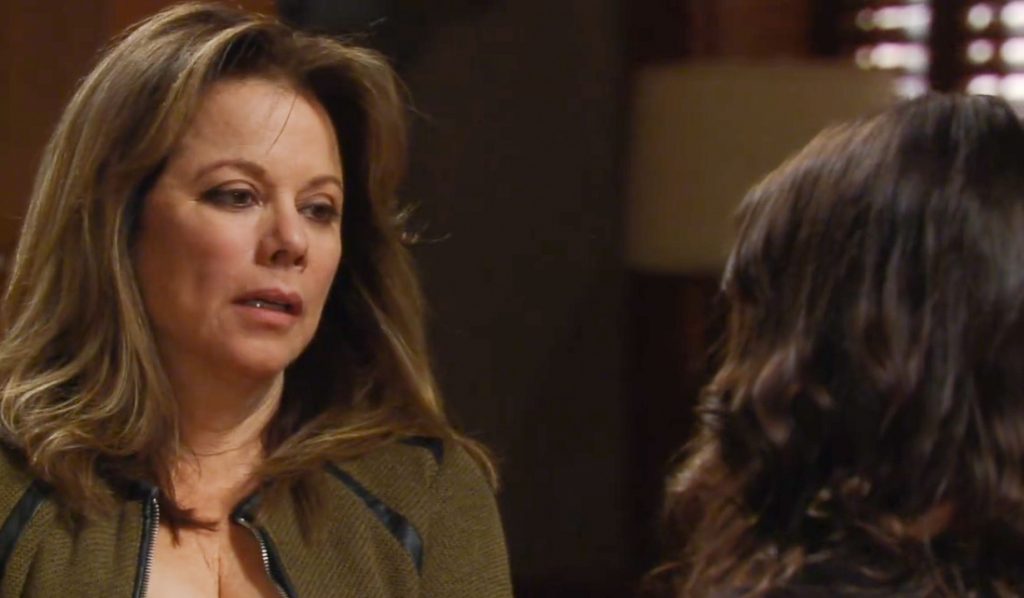 General Hospital (GH) spoilers tease that in Port Charles, NY Sam McCall (Kelly Monaco) is about at her wit’s end with her mom Alexis Davis (Nancy Lee Grahn). As GH viewers know, shortly after Neil Byrne’s (Joe Flanigan) death, Alexis started turning to alcohol for comfort, and she’s barely put down the bottle since. Alexis is really out of control, and she’s slept with Ned Quartermaine (Wally Kurth) in her drunken haze and said a lot of things she wouldn’t ordinarily say.

Well, Sam has tried just about everything she can think of to get Alexis to stop her path of self-destruction. Sam has tried talking with Alexis calmly, refusing to let Alexis see her grandkids, and most recently she staged an intervention which ended poorly. Alexis seems to be hell-bent on continuing to numb her pain with alcohol, and there’s probably nothing that will stop her until she’s good and ready to stop.

We couldn’t help but notice that Alexis has been particularly mouthy with Sam lately about Jason Morgan (Steve Burton). Alexis strongly disapproves of Sam’s relationship with Jason because of Jason’s involvement with Sonny Corinthos (Maurice Benard) and the danger that he’s constantly in. When Alexis learned that Jason and Danny Morgan (Porter Fasullo) were at The Floating Rib when it exploded, she was quick to comment about danger following Jason and it all coming back to bite.

Now, in the coming days, it should become clearer that the explosion at The Floating Rib targeted Jason directly, and that’s probably going to incense Alexis. Once Alexis sobers up a bit, she’s surely going to have a lot to say about how Jason is a danger magnet and that this time, his association with Sonny and his dangerous lifestyle got people killed and nearly got Danny killed.

GH Spoilers – Jason Morgan Did Not Cause The Blast

Of course, GH viewers know that Jason’s not the cause of the blast – the blame lies squarely on Cyrus Renault (Jeff Kober) and Julian Jerome (William deVry). But Alexis will probably take the opportunity to gripe to Sam about the whole thing, putting the blame on Jason and blasting Sam for associating with Jason and putting Danny in danger.

That’s not going to go over well with Sam, especially if Alexis is in a drunken or hungover state when she’s saying all these things. One wonders if Sam will actually cut Alexis out of her life for good once Alexis says too much about Jason. Alexis might just take things too far and end up crossing a line that she can’t come back from with Sam.

We’ll see what happens between Sam and Alexis, but it certainly seems like they’re headed for a very bad place very quickly. And if Alexis isn’t careful, she’ll soon have no one left to turn to for support – she’s quickly alienating Diane Miller (Carolyn Hennesy) and Molly Lansing-Davis (Haley Pullos) as well as Sam, so she could be alone with literally only a bottle for a friend in the days to come.

Do you think that Alexis will blame Jason for the explosion? Stay tuned to the ABC soap and don’t forget to check SOS regularly for the latest General Hospital spoilers, news, and daily episode recaps.