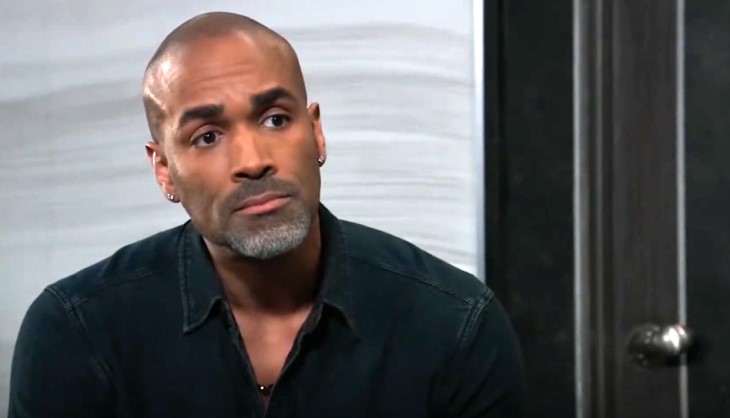 General Hospital (GH) spoilers suggest that Curtis Ashford (Donnell Turner) could seriously be losing his touch. As many fans have noted recently, Curtis is supposed to be a good private investigator. However, Curtis hasn’t caught on to his wife, Jordan Ashford’s (Briana Nicole Henry) deceptions of late, now has he?

GH fans know that in recent episodes, mafia boss Sonny Corinthos (Maurice Benard) and his enforcer, Jason Morgan (Steve Burton) have been figuring out the situation Jordan’s found herself in. In fact, it only took Sonny learning that a large drug shipment had made its way through his organization’s territory for him to know something was wrong.

Jason merely had to make a couple of phone calls, and when he and Sonny put their heads together, they knew immediately that someone at CPCD had been compromised. Two seconds later, based on the level of authority needed to move cop patrols around, Sonny and Jason knew that someone was Jordan.

In stark contrast, Curtis has been right there, smack up in his wife’s business. At least, that’s what he thought. In reality, Jordan has been leading Curtis around by the nose. GH fans may agree that Curtis may have been suspicious of some things Jordan had been telling him ever since her son TJ (Tajh Bellows) was kidnapped.

However, Curtis certainly didn’t dig too hard to discover the truth. Maybe Curtis has felt that Jordan’s just been under too much strain lately. Maybe, Curtis didn’t want to make his wife feel that he didn’t trust her. Those are all possibilities. It’s also possible that because Curtis has just been way too close to the issue, to the principle person involved, that he couldn’t remain objective.

Whatever the reason, GH viewers will most likely agree that Curtis hasn’t been able to see the forest for the trees when it comes to Jordan. Meanwhile, Sonny’s cracked the case.

Regardless of who happens to be smarter than whom, once Sonny knew Jordan was in trouble, he crashed Curtis and Jordan’s pad. Now, it’s anyone’s guess as to what Sonny’s complete plan to solve the problem happens to be. However, it seems clear that Jordan and Curtis need Sonny’s help to take their mutual enemy, Cyrus Renault (Jeff Kober) down for good. In fact, yet again GH fans have seen Curtis tell Jordan that they need to ally with Sonny to get TJ back. (That’s kind of annoying since Curtis has been urging this very thing for more than a month now. Unfortunately, Curtis’s pleas fell on deaf ears.)

GH viewers may have noted that at least part of Sonny’s plan for getting rid of Cyrus and rescuing TJ involves a full confession on Jordan’s part. Jordan already realized that Cyrus’s idea of revenge meant that she would essentially take the criminal mastermind’s place in Pentonville. Cyrus would be exonerated and Jordan would go to prison. Perhaps shockingly, Sonny agrees!

There is no way possible that Curtis can love this aspect of Sonny’s plan. Is a confession by Jordan the only thing Sonny needs in order for his plan to work? For that matter, what is the remaining part of Sonny’s plan, or is that it?

Either way, Curtis has to be kicking himself for how blind he’s been. Everyone else has to be wondering how this is going to play out!