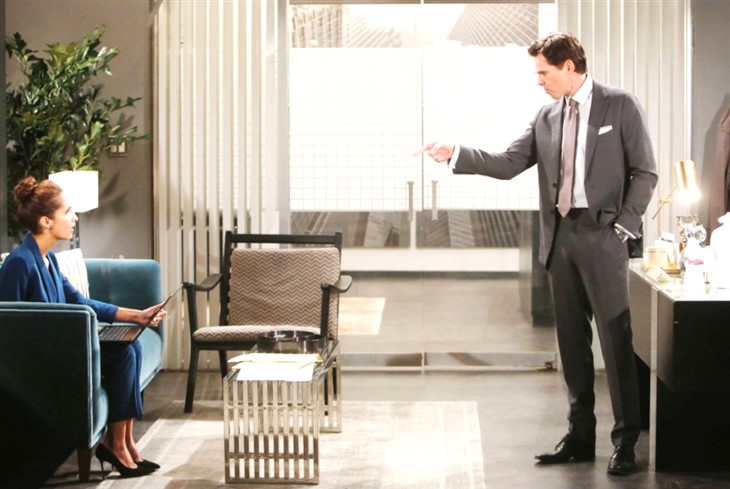 The Young and the Restless (YR) spoilers tease that Billy Abbott (Jason Thompson) will soon be on a mission. As Y&R viewers know, Rey Rosales (Jordi Vilasuso) has just informed Billy that the gun that was used in the shooing of Chance Chancellor (Justin Gaston) was registered to him. The Young and the Restless spoilers show that’s going to send Billy into a tailspin, since he knows for sure that he wasn’t the shooter. But it will appear that someone’s gone to great lengths to set Billy up for the shooting, and Billy will want to find out who it is.

According to Y&R spoilers, Billy and Victoria Newman (Amelia Heinle) will quickly realize exactly when Billy’s gun must have been taken – during the break-in at Victoria’s home several weeks ago. As it will turn out, Billy will have left the gun in a lockbox at Victoria’s house, so now the break-in will make perfect sense – the intruder wanted to get the gun in order to shoot Adam Newman (Mark Grossman) and frame Billy for the crime.

The Young And The Restless Spoilers – Billy Abbott Needs To Investigate

On the episode airing on Tuesday, November 24, Billy will tell Victoria that he needs to do some investigating on his own and try to figure out who set out to frame him for killing Adam. Billy will even tell Victoria that he needs to get into the head of the actual shooter/framer, which could be pretty scary if the person turns out to be Adam himself, but it seems that Billy is thinking that it could be someone other than Adam.

Of course, Billy’s investigation will be concurrent to the official police investigation, and Billy’s probably smart for wanting to branch out on his own, given that the GCPD investigations tend to be iffy a good portion of the time. Interestingly, Y&R spoilers say that Billy and Lily Winters’ (Christel Khalil) partnership will take an unexpected turn in the days to come, so one wonders if Billy will enlist Lily to help him investigate who might be framing him.

Billy and Lily could team up and unofficially pour over the evidence. It’s something that might bring the two of them closer together, as they sleuth around and try to investigate who would have a motive to both want Adam dead and put Billy away for his murder. Together, Billy and Lily might have more success than the Rey and Paul Williams (Doug Davidson), especially if they look at the timing of the break-in at Victoria’s home.

The break-in occurred just after the exposé was published, so it seems that the person who framed Billy started plotting his or her crime back then. Here at CDL, we’ve theorized previously that Alyssa Montalvo (Maria DiDomenico) could be the culprit, as she might have felt used by Billy after the exposé was all said and done. And Alyssa would certainly have motive to want Adam dead. Perhaps Billy and Lily will reach the same conclusion as they work together to solve the mystery.

We’ll see what happens here, but we expect that Billy and Lily could solve this thing if they put their minds to it. And they may end up getting pretty cozy in the process! Do you think that Billy and Lily will solve this crime before the GCPD does? Stay tuned to the CBS soap and don’t forget to check CDL frequently for the latest Young and the Restless spoilers, updates, and news. We’ve got you covered!